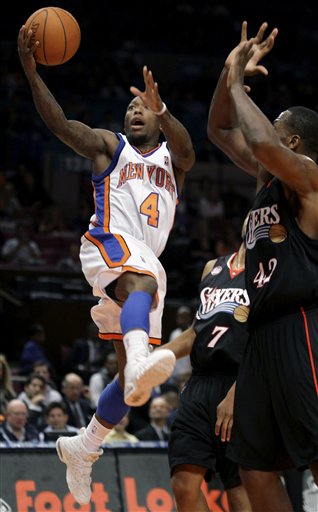 In game 3 of D'Antoniball exhibition, the Knicks ran and scored a bunch, but collapsed down the stretch to fall to the Sixers in New York. I was able to catch the whole game, and took notes for those of you who missed out.

- Guys seem to be gambling more than last year. Maybe it's just a particular set of matchups or preseason restlessness, but the guards in particular try to pick pockets and snipe passing lanes. The good news is that this creates occasional steals and fast break buckets. The bad news is that the help defense lags terribly, so gambling means giving up a lot of easy baskets and fouls (The Sixers had 29 FTA) as well. It makes me wonder if D'Antoni encourages this sort of handsy defense. John Andariese did mention that Coach had challenged Nate Robinson to get 3 steals a game, which would suggest that he's on board.

- The Knicks jacked up 32 threes last night. That makes up more than a third of their 87 field goal attempts. The crazy part is that they made 15 of those 32 threes, which amounts to a very solid 47% from downtown. Should we be expecting 30+ threes a night this year? Cause if they're not falling like they were last night, I might be in a straight jacket by December.

- 20 fastbreak points and in the first half. None in the third quarter. I can't tell what's at play there. Tired legs certainly contributed, but that's such a marked drop that I wonder if there was a strategy adjustment at halftime. Either Philly did a better job getting back on D or D'Antoni slowed things down going into the second half. The latter is pretty much unfathomable, but there was a change of pace in the second half of the Toronto game as well, so something's clearly happening. It's possible that Coach tried to rein in some of the gambling that occured in the first half. Nate and co. forced 8 turnovers in the first half and only 2 in the second.

- It isn't clear yet who's behind the wheel in the final 2 minutes. This was a close one going into crunchtime, but things were completely disorganized on both ends of the floor down the stretch.

- We may be looking at our first legitimate triple double threat since Latrell Sprewell. David Lee's passing skills are on display in the D'Antoni offense. He made a couple backdoor feeds and kick-outs, finishing with 7 assists. Z-Bo didn't drop any dimes in this one, but look for his assist numbers to spike as well.

- Both in training camp and in preseason, Lee seems more willing to put the ball on the floor and drive to the basket like a guard. I do wish, though, that he'd use that large body and draw some contact instead of flipping it high off the glass and ducking from contact.

- Eddy Curry's first preseason minutes were a complete failure. He dropped a few passes, got back late on defense, got stuffed by Theo Ratliff's corpse on a dunk attempt, and committed 3 fouls in only 6 minutes, only to leave with an upset stomach. While Randolph appears at least somewhat equipped to prove the doubters wrong, Eddy Curry has done nothing to warrant a spot in the rotation. It's still early, but not that early.

- Jamal Crawford got 26 minutes was a non-factor. I'm just gonna attribute that to preseason lineup noodling and ignore it.

- There was a fantastic 19-4 second quarter that included a Chris Duhon transition three, a Lee steal to ignite the break that culminated in a Q dunk, and Randolph running the floor for a tip-in. If the energy on both ends was that consistent for the entire game, we might've finished with upwards of 400 points.

- I know it's preseason, but Nate Robinson has lead the team in field goals attempted twice in three games. Wilson Chandler's putting up his fair share as well. It's funny because Jamal Crawford, the one guy you'd expect to have a permanent green light, has curtailed his shot attempts the most.

- Marreese Speights is a terrifying human being and a shoe-in for the Jason Maxiell All-Stars. At one point, he blocked David Lee's dunk attempt and wagged his finger like Dikembe Mutombo. I don't have proof, but I'd bet good money that Speights occasionally eats toddlers. 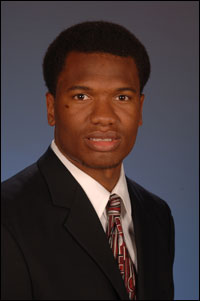 - Mardy Collins has developed a nice little floater in the lane, and looks more determined to get to the basket and make things happen. Oh my god...did I just praise Mardy Collins?

- 7SoM points this out and I wholeheartedly agree: the game changes when Nate's on the floor. The defense gets pluckier and peskier in his presence, and it's not just him. Nate's knack for the obnoxious is contagious.

That's all I got for this game. The next exhibition game against Boston is this Friday. Me, I'm ready for the real deal. Just a couple weeks now.