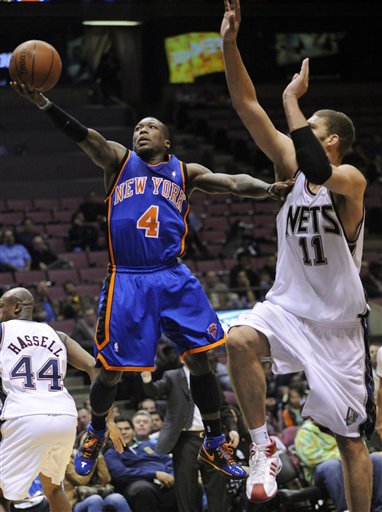 D'Antoniball is gonna kill me this year. Even in the course of one relatively mellow preseason game, the Knicks' newfangled speed makes for electrifying bursts of scoring and sloppy runs of incompetence that may cause my nervous system to shut down completely. It's becoming clear that that green light isn't turning off any time soon, and the Knicks are loving their freedom to push the ball and fire away. Some quick notes because I wanna get to today's stories:

- Wilson Chandler's line is always surprising. Wil was 10-15 from the field last night for 22 points to go with his 8 rebounds. The thing is, his shots often come out of the flow of the offense, and many of the rebounds come by snaggling loose balls and taking people by surprise. He's got an ugly, herky-jerky game, but continues to fill up the box score.

- Eddy Curry needs to play help defense without assaulting people. Curry's defense in general seems to have gotten even worse. He allowed the relatively tame Brook Lopez a good chunk of his 19 points by either viciously fouling him or neglecting to contest his shots entirely. This may be the beginning of the end for Curry, because he's done nothing to show that he'll ever fit on this team again.

- Mardy Collins threw down on Sean Williams in the second half and then buried a dagger three-pointer in the fourth quarter. I don't know that he's improved much, but he's certainly playing within his own limits and getting the job done.

- Nate Robinson has this new thing where he defends a point guard bringing the ball up by turning his back to him and playing D with his ass. I've yet to discern the purpose of this strategy, but I trust Nate.

- The absence of Nash in the D'Antoni offense makes for one particularly troubling phenomenon. In the second half (usually beginning of the third), when the offense predictably grinds to a standstill and shots aren't falling, the Knicks don't have anybody to single-handedly take over and keep the team afloat. You'd think Crawford could play this role, but he hasn't just yet. More on this later.

- If you haven't heard Brook Lopez's voice before, I highly recommend it. Ian Eagle thinks he sounds like a combination of Jason Collins and Jeff Spicoli. My suitemate (PPisthetruth34) heard his voice from afar and asked "wait...did the Nets draft Brendan Fraser?"

- The Knicks jacked up quite a few threes (25), but once again hit a nice portion of them (12). Better, though, is that they got to the line to connect on 26-36 attempts to supplement the long-range attack. I'm a little more comfortable with a three-point barrage of guys are still getting to the rim with some frequency.

That's all for your recap. Posts on today's news coming soon.