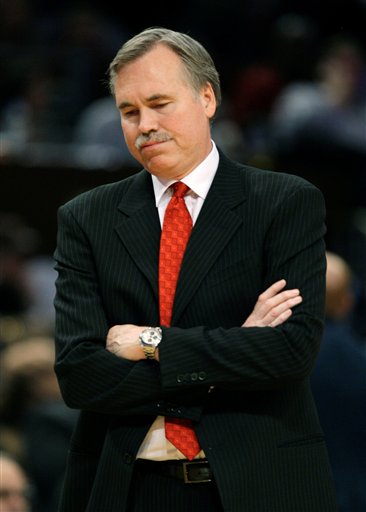 Remember when I said that D'Antoniball was going to kill me this season? Well, it didn't even take until the regular season for me to get hypertensive. Last night's performance had my blood boiling like it was 2006. Some brief notes on an ugly game:

- Citing a desire to experiment, D'Antoni benched Jamal Crawford and Zach Randolph in favor of Stephon Marbury and Nate Robinson. So, with three point guards, Wilson Chandler, and David Lee on the floor, there were some interesting matchups. Duhon spent most of his time guarding Paul Pierce, while Chandler was stuck with Kevin Garnett and Lee had to bang with Kendrick Perkins.

- The offense, though, was the real problem. Partly because Boston got back on defense, and partly because the ball movement completely tanked, the usual first half vigor was nowhere to be seen. Contested threes were hoisted, pick and rolls were botched, and possessions were wasted with little or ineffective passing. New York was down 58-34 at the half. Things clicked intermittently in the second half, but never enough to cut it close.

- David Lee looked particularly frustrated, and rightfully so. Besides playing out of position at center, he was routinely ignored when cutting to the basket, and found himself out of the flow of the offense.

- Big statistic of the game: 4-31 from downtown. We were waiting for the other shoe to drop- for the shots to stop falling- and it finally did. The problem is that the guys couldn't adapt. Facing an able defense that stifled the fast break game, the Knicks forced shots and wasted possessions instead of stepping up the motion and passing. There just wasn't a Plan B. Someone might argue that once in a while the shots just don't fall, but shooting 12.9% from three point range would be inexcusable from a team of flamingos, and they don't even have hands. At some point, you must stop shooting.

- I'm clinging to the hope that this is all a fluke and Jamal Crawford's gonna open the season by dropping another 52 on Miami.

- Wilson Chandler sprained his knee in the second quarter and did not return. He did walk off by himself, though, and didn't appear to be in excruciating pain. That is the same injury he had last April, though, and my medical school education tells me that repeatedly injuring the same body part isn't reccommended.

On the whole, this game reeked of the weak effort and hair-brained play that characterized the Isiah Thomas era. The good news is that it's just the preseason, but I'm not looking forward to games like this in the coming year.