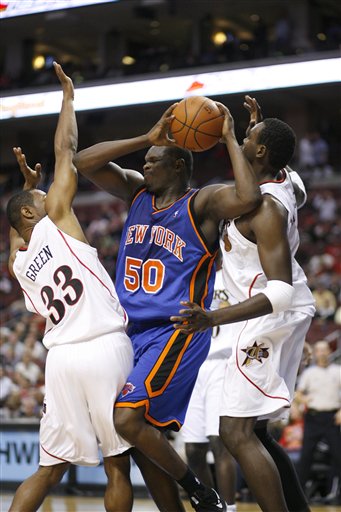 The Knicks were surprisingly impressive in their first game of the season. As for their second run...not so much. The Sixers were just too big, too active, and too hot from the field for New York to even have a shot in this one. It's Halloween and I wanna go drown my sorrows in candy corn while dressed as a hippo...so let's recap quickly.

- On Wednesday we saw, at least for part of the game, New York D'Antoniball at it's most potent. Tonight was an example of what happens when a team with a collective green light to shoot goes collectively cold from every range. The Knicks shot 33% from the field. Thirty-three percent! And it wasn't always good defense. It was just an epidemic of chucking, instead of attacking the basket when things weren't clicking.

- I was arguing at lunch today that the one player I'd like on the Knicks is Sean Williams. Tonight was a perfect example of why Chong would be a valuable asset. With Curry beyond repair, Jerome James more or less retired, and Randolph Morris elsewhere, the Knicks are without a center. This means that, even for a team that's been without shot-blocking, the defensive intimidation is dismal. Rebounding, too, suffers quite a bit without a single 7-footer to be seen. The Knicks got swatted 7 times tonight (compared to zero for us). The rebounding deficit was 61-43. I'd be get mad, but how is a squad with nobody over 6'9'' (besides Gallinari, but, you know...) supposed to stop Elton Brand and Sam Dalembert. This is going to continue to be a problem until changes are made.

- Stephon Marbury will not be playing any time soon, and I think D'Antoni defended that decision pretty well. Or at least I thought that before the game. His point was that Marbury doesn't factor into the Knicks' future plans, so he'd rather let Collins, Gallinari, and friends get some burn instead. That makes it sense, but it does suck to watch Collins airball threes while Marbury sits out in a black suit with leather panels. I think he was Zorro for Halloween. 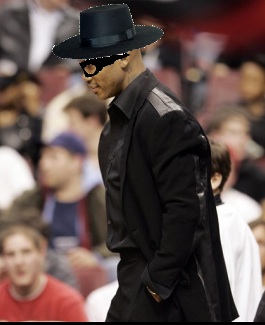 - Speaking of which, we've now got a statistic called the Mardy Collins Assist (MCA). I've been meaning to give a label to this phenomenon for years, and I've finally got my namesake. Mardy twice airballed jumpers directly into a rebounder's hands, thus providing them with an easy, albeit unexpected, look at the basket. Long live the MCA.

- Chris Duhon has been underwhelming. He's still getting used to his teammates and the offense, but he's having way too much trouble finishing around the rim.

- David Lee looks incredibly frustrated. Maybe it's the fact that his jumpers aren't falling. Maybe it's being repeatedly ignored on the pick-and-roll. Maybe it's being stuck boxing out trees like Sam Dalembert. I can't say I blame him. Keep your head up, Dave.

- Danilo Gallinari got 8 garbage minutes, and once again looked terrified. He did get his first points at the line, but it's gonna take many more toe-dips into the forbidding NBA waters before he can contribute with any regularity. Gus Johnson: "He's a young kid trying to find his grown man legs". A little homoerotic, but Danilo has really got a ways to go.

Anyway, it was a really aggravating loss, and it hurts to see things fall apart that badly, but these things happen. It's just one game. Everyone have a fun, safe Halloween, and remember not to eat candy that isn't wrapped. Your neighbors may have poisoned it! Peace.