Share All sharing options for: Game Thread: Knicks at Grizzlies- 11/12/08 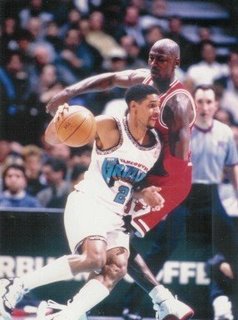 Two questions. 1. Remember Lawrence Moten? I had an autographed Moten rookie card when I was a little one. No big deal. 2. Where did MJ's arm go?

Anyway, the Knicks are in Memphis, not Vancouver, tonight to face the Grizzlies. The Grizz are 2-0 at home and will likely pose a big challenge. O.J. Mayo can score in bunches, and will likely be psyched to show New York what we're missing. Marc Gasol is a 7-foot oso who will give Lee and Randolph a heap of trouble. Rudy Gay and the point guard tandem of Conley and Lowry aren't too shabby either. On the other end, look for Zach Randolph to rebound from his clumsy performance in San Antonio with a big night against the much lighter Darrell Arthur.

The good news is that this will likely be a more open, free-form game than last night's slugfest in San Antonio. Marc Iavaroni is a D'Antoni disciple, and the Grizzlies are sillier and more athletic than Popovich's slave army of defensive stalwarts. The downside is that our guys are playing for the second night in a row. For a squad that plays a tight, nine-man rotation, back-to-backs might be an issue. Then again, I've always heard players dispel the back-to-back myth, since games are easier than practices on the body. Who knows. It'll be interesting to see how the Knicks come out in the first quarter tonight, and if they can maintain the stamina for 48 minutes. Get them W's, dammit. Tipoff's at 8.