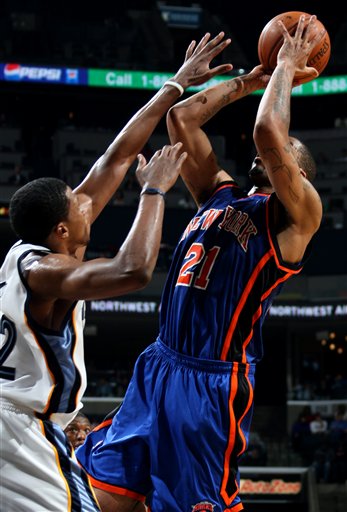 Sweet baby Jebus, that was nuts. The game started slowly, was ugly through much of two quarters, and then absolutely blossomed into a bouquet of fine passing, aggressive defense, and hot shooting. Here are some stat-laden notes from the most outstanding offensive performance we've seen in years.

- I have one complaint. Let's get it out of the way. The Knicks started slow, which happens, but took a turn for the worse in the opening of the second quarter. Malik Rose got in for about 6 minutes in that quarter and single-handedly dug the Knicks into a hole. He committed stupid fouls, ruined good passes, and missed two threes. Two threes! Malik Rose! Ok, done complaining.

- Wilson Chandler had a career night despite being a little sick and getting his eye poked pretty hard late in the game. Wil had 27 points on 11-12(!) shooting to go with 7 boards, 3 assists, and 3 steals. He was absolutely unconscious. Most impressive were his four threes, at least two of which came when heavily contested and with one eye completely closed.

- I heard Dwyane Wade's mother likes to paint her nails and wear high heels. Does that mean Dwyane likes to do that too?

- Zach Randolph did, indeed, rebound with a solid 18 and 10 in 36 minutes. Also 3 steals, oddly enough. He couldn't really handle Marc Gasol on defense, but who can these days?

- Jamal Crawford's outside shot was streaky, but he asserted himself, got to the basket, and had himself a very nice game. 25 points on 10-20 and 8 assists for JC. Solid, unselfish basketball from Jamal.

- Chris Duhon got into the flow of things in the second half and had himself a nice Du-line: 12 points, 7 assists, and 1 turnover. That's all we ask of Du.

- Man, I wish they had ribs at Knicks games.

- I really love the Grizzlies. Rudy Gay's been one of my favorites since he came in the league, and now with Gasol and Mayo they're an absolute delight to watch. Especially when they're so gracious with the Knicks.

- How's this for a sequence? Randolph has the ball stolen on the perimeter, recovers it, and swings the ball over to Richardson. Richardson bricks a three, but Randolph rebounds it, only to miss a putback. Chandler rebounds but completely shanks a tip dunk, so hard that the ball shoots off the rim back into his hands as he falls to the ground. From the ground, Wilson passes it back out to the perimeter. The ball gets to Crawford in the right corner, where Jamal promptly completes a four-point play. Hey Gian? We need replay of this at 7SoM.

- The Knicks look a lot better shooting threes off the drive-and-kick. When Robinson, Crawford, or Duhon streaks into the paint and hits an open man in the corner, I'd bet that's our best percentage from downtown.

- Knick blowouts hadn't really crossed my mind, so you know what I hadn't though of? We don't really have a garbage squad. D'Antoni plays a 9-man rotation, and pretty much everybody else is injured or Stephon Marbury. The garbage lineup tonight was Collins, Roberson, Rose, Robinson, and Randolph. I would've just put Quentin Richardson out there to make it the "R" lineup. Woulda been a good night for Danilo Gallinari to get some shots in.

That's all for now, folks. I'm gonna stay up late to fully revel in the glory of tonight's win. And because I have a buttload of work. Next game's on Friday against OKC. I may be traveling, so is anybody down to recap that one? Let me know.