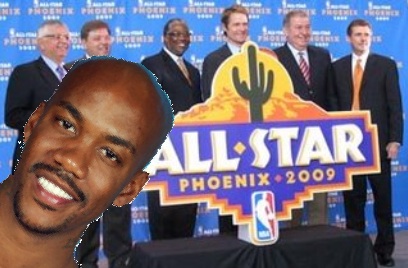 Yes SIR we can!

This comes in response to a Fanpost from s.bucektz. The ballot for the 2009 All-Star Game in Phoenix was released a few days ago, and there's a very important inclusion amongst the Eastern guards. From the announcement (emphasis might be mine):

Thus, in the spirit of Posting and Toasting and all others who have proposed the idea, I'd like to formally announce my advocacy for Stephon Marbury as an All-Star. Steph spent the summer working into tip-top shape, performed well in training camp, and had a solid preseason. What's he gotten for his effort? Zero minutes to date. Regardless of what you think about his spot on the Knicks, I think we can all agree he's got a right to play somewhere this year. How about playing a game in which he represents New York, but nothing actually counts? What could possibly be better?

Marbury's Knick days are likely behind him, so let's pay respects for his tenure in orange and blue- his heroics, his antics, and his idiosyncrasies. Stephon's been the most prolific font of entertainment and discourse the Knicks have seen in years. Let's give him one more opportunity to thrill us. Vote early, vote often, and vote Stephon Marbury to the 2009 NBA All-Star team. If you're down with the cause, tell your friends, mention it on your blog, fill in a ballot for your pet iguana...every vote counts. Yes we can!

(A few more games, and I may be back on my soapbox for Zach Randolph. We'll see.)