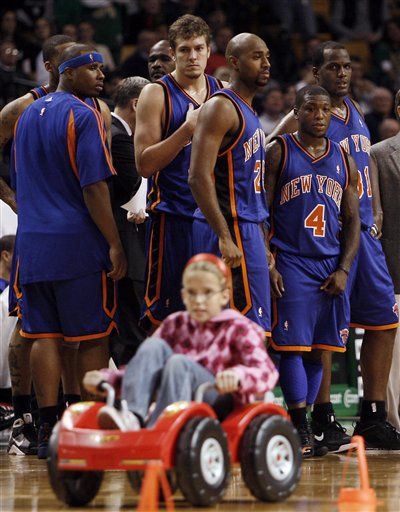 Somehow, this photo summarizes tonight's game better than I ever could. (AP Photo/Winslow Townson)

A loss is a loss, but the Knicks hung around tonight in Boston, and even made the Celtics sweat a little down the stretch. The guys actually squandered a bit of an opportunity, as Doc Rivers decided to compound the suspension of Kevin Garnett by benching Paul Pierce and Rajon Rondo for much of the first half. Unfortunately, the Knicks' undersized big men groveled at the feet of larger bodies once again. This time it was the brutish Kendrick Perkins and Leon Powe, who had 16 and 14 points respectively, that caused problems for the New York frontcourt. The C's pounded the ball down low and scored easily and efficiently through 3 quarters to gain enough ground to keep the Knicks at bay later on. Some more notes:

- This was a chippy one throughout, and tempers were flaring everywhere. Zach Randolph was frustrated all night, and his aggravation bubbled to the surface in a little face-to-face altercation with Leon Powe. There wasn't so much as a shove, thankfully, and the two were issued double techs. Later, Richardson and Pierce had some words, rekindling a confrontation that's presented a couple times since Q's been a Knick. It's hard to blame the players for being feisty, though, since both coaches had their panties all in a bunch on the sidelines. The refs got an earful from both Doc Rivers and Mike D'Antoni, but Coach Mike was especially bitchy, and got a tech for damn near shanking Mark Lindsay at the end of the third quarter. He was still jawing after the commercial break, and I wouldn't be surprised if Lindsay wakes up in bed with a horse head some time soon. 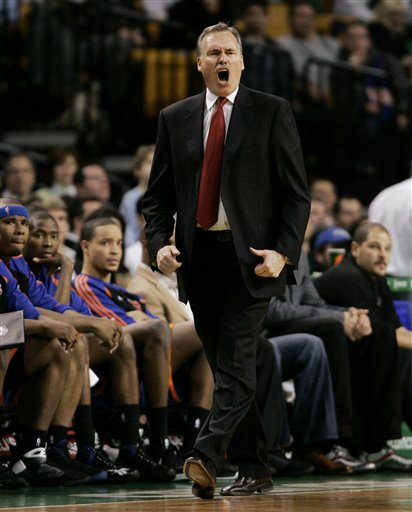 - The Knicks came out shooting threes and nothing else, as they often do, but tonight the shots didn't really go down in the first quarter, and never picked up. They were 9-30 as a team, which won't hurt our proud lead in the "made and attempted" department, but turns the stomach a bit when you calculate the percentage. (My number-crunching parrot did it for me, and it's 30%. Quoth Polly, "that sucks".)

- There's a difference between passing a lot and ball movement, ya dig? You can stand still and swing the ball all around the perimeter as much as you want, but it's setting screens and hitting cutters that'll get things done in a half-court set.

- I'd rather see Duhon and Lee play the ball and commit a foul than grab their nuts, shut their eyes, and stand still in hopes of a charge.

- The Knicks actually held a lead after the first quarter, which was garnered by being active and forcing turnovers on the defensive end. I'm pretty sure the C's turned the rock over 6 or 7 times in the first 12 minutes. After that, not so much. Boston (the most turnover-prone club in the league, we learned), finished with a relatively light 14 TO's, considering the first quarter damage.

- Wilson Chandler had himself a really nice game on both ends. Save for a spasm of ill-advised threes in the second half, Wil was attacking, taking and making open shots, and letting the game come to him. It's becoming apparent that his best look is a catch, one dribble with the left hand, and then a nice 18 footer from either side of the key. On defense, Chandler got completely abused by Celtic big men, which is hard to criticize since he's out of position. On Pierce, though, he showed some real mettle. Particularly in the fourth quarter, Wilson harassed the indomitable Pierce into a few misses, even physically deterring a doubling Nate Robinson to take his man one-on-one and force a brick. Wilson Chandler got a heart and a pair of balls, and I respect his 7 rebounds and 4 fouls as much as his 23 points. Cut out a few of those threes and he's got one more fine performance.

- That guy in the Bud Light freeze-frame "drinkability" commercial (Not the hipster cabin one, not the chick tailgate one- the other one.) should send 20% of every paycheck to Dave Chappelle.

- Nate Robinson stuffed Kendrick Perkins in the fourth quarter. It was called a foul, but Perk will lose a little sleep over that one.

- Mardy Collins got a relatively heavy 11 minutes in this one, and didn't completely wet the bed. He still seems pretty wild on offense, and even his makes look accidental, but he got a few good looks at Pierce and Tony Allen, and did a fine job.

- Speaking of Collins, around 20 seconds left in the first quarter, I'm pretty sure Kelly Tripucka said he was "shitting the defense". No doubt I misheard that, but can I get a second opinion?

- Collins' minutes undoubtedly sent a message to Jamal Crawford, who was ghost like Swayze in 25 minutes. He was 1-4 for 3 points, played no defense, and turned the ball over a couple times. Crawford knows he's got what it takes to accomplish a lot in D'Antoni's system, but he's gotta use his head and capitalize on his skill set to stay on the floor. Coach has made that clear.

- What's with Malik Rose's pump-faking? Has Anthony Mason been hired as an assistant coach? By the way, we need video of Rose pulling the chair on Leon Powe in the second half, and Powe somehow maintaining his dribble during his awkward descent.

- Dwyane Wade: "G2 is the smart choice for athletes...'cause it is low in calories". That's not funny. That's just a poorly-researched statement of opinion. WHY ARE YOU ALL LAUGHING?

- I tried really hard not to get myself worked up over a sure loss after the Dallas game nearly burst my aorta, but I gotta admit, it got a little tense at the end there. The Knicks cut it to 4 in the last two minutes, but credit Brian Scalabrine with a huge corner three to ice the thing. Dick. 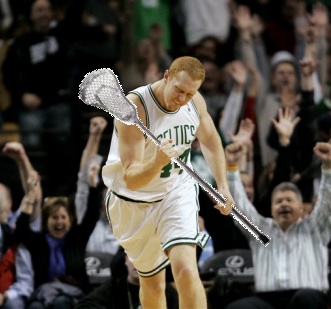 That is all. The Knicks have now fallen to 6-5, and the next game's on Friday in Milwaukee. That's gonna be a big one.