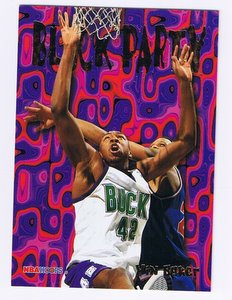 What up people? If you're wondering why your eyes were just assaulted by a mess of psychedelic colors and ill-fated NBA players, it's because the Knicks are taking on the Milwaukee Bucks tonight in New York. Tommy Dee has the report that Zach Randolph may sit this one out with a sore knee, as well as the news that Stephon Marbury will be deactivated (and possibly waived at some point...more on that during the week). Though they're not as gigantic as the Sixers, the Bucks do have Andrew Bogut, who could very well have a career night against the Knicks' shrimpy frontcourt. Meanwhile, Ramon Sessions is an up-and-comer in the backcourt and Redd and Jefferson have always been Knick-killers. Milwaukee, though, isn't the deepest of teams, so look for the Knicks' potent second unit to change the pace on them and do some damage.

Check out the magnificent Brew Hoop for the Bucks' thread. Tipoff's at 6. Get them W's.