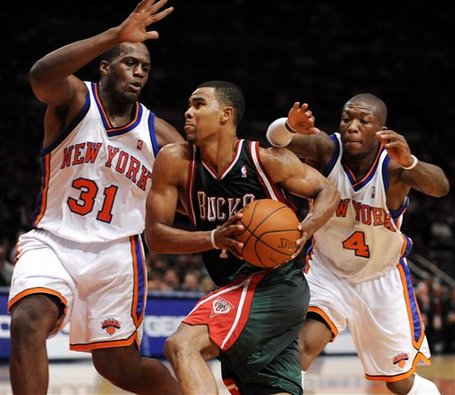 This post might also be titled "The Day We Realized the Knicks Were, Once Again, Not Going To Be Very Good". For the second game in a row, the Knicks looked flat and discombobulated, and were soundly stomped by a more cohesive team. Some notes:

- Problem 1: The Knicks lack a leader on the floor. Chris Duhon isn't a bad basketball player, but he's not showing any of the qualities that a leading point guard should have. Du frequently misses cutters and wastes picks- settling instead for easy, ineffectual passes. Note David Lee's two field goal attempts in 20 minutes. Part of that is because he was repeatedly missed on screen-and-rolls. If Wilson Chandler wasn't so shot-happy, his line would look very similar. Anyway, one nice pass begets another, and Duhon's impatience and tendency to miss cutters gets each possession off to a rocky start. Oh, and solid defensive point guards don't let Ramon Sessions put up 18, 8, and 7.

- Problem 2: The Knicks are so, so ill-equipped to guard the post. I feel genuinely sorry for David Lee and Zach Randolph. Both are putting in the effort on defense, but a lack of height in Lee and agility in Randolph made Andrew Bogut and Charlie Villanueva look like Shaq and Garnett. If the Knicks stay this short up front, there are a lot more rebound losses (48-41) to be had and fouls (26 tonight) to be committed this season.

- Problem 3: The number of three-pointers that go up each game continues to baffle me. The Knicks shot 12-36 from downtown, which brought their overall average shooting down to 37 percent. You simply can't do that.

- Nate Robinson has changed up his free throw form, and now tugs on his earlobes before every shot. I wouldn't say this meets the criteria to be "problem 4", but I do want an explanation.

- I complained about Jamal Crawford shooting to much, and now he's punishing me with 0-6, 1 point performances. Yes, Jamal Crawford had a single point in 32 minutes.

- Props to Quentin Richardson, who not only had his shot falling, but appeared to be the only Knick on the floor with a pulse.

- Problem 4: Remember earlier when I said the Bucks would have to compete with the Knicks' potent second unit? What the hell was I talking about? Chandler and Robinson are competent, but it's all downhill from there. Malik Rose has a role, but is forced to contribute way more than his talent permits. Anthony Roberson, bless his heart, is a nice shooter, but can't do much else. Mardy Collins has absolutely nothing to offer on either end of the floor. I almost long for Howard Eisley and Frank Williams right now.

Anyway, the season is young, so not all is lost. It's hard to imagine, though, how Mike D'Antoni and the Knicks can make up for such gaping holes in their rotation without serious changes being made. If nothing is done, we may be looking at one more season of futility. Pretty soon we'll be over the shred of hope that the Knicks will compete this year, and fully interested in the development of the team's young talent. Let Danilo spin!