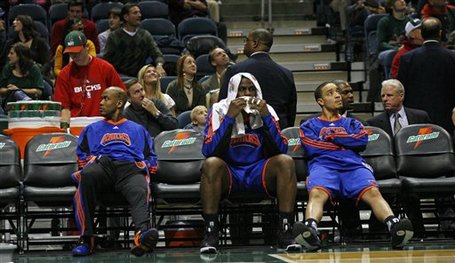 One down, 152 to go. We've got quite a bit of time until the mythical 2010 beast graces our team. This one was particularly sour, since the newbies from Cali have yet to show up. Let's recap last night's events quickly:

- The Knicks were completely lifeless last night, and it's hard to blame them. It's tough for us to face two seasons of idling before 2010 comes. It's tougher for the guys who have to actually play the games. In interviews, guys like Nate Robinson seemed legitimately crestfallen at having Crawford and Randolph so swiftly taken away. Basketball's a business, and it's easy for us to think of certain individuals as just a big contract or a trading piece, but the players don't think that way.

- Gus Johnson had a particularly brilliant call on one of the Knicks' many blunders: "Robinson, working the pick and roll with Malik Rose, kicks it out to Mike D'Antoni...". The passes were errant al night, the shots were out of flow, and the seven guys on the court looked tired as hell.

- The big news was that Stephon Marbury suited up and participated in warm-ups, but did not play. It depends who you ask, but either he refused to enter the game or D'Antoni made it clear that he would not be playing this season. The Knicks would rather we not dwell on this conundrum, and I'm down for that. I will say that it's pretty surreal to see the Knicks huddle on one of the bench, while Marbury grins off into space on the other end.

- I've never seen so many airballs in a game in my life. The rims in Milwaukee must be the size of quarters. That or guys like Malik Rose and Wilson Chandler were shooting contested fallaway jump shots that didn't have a prayer of drawing iron throughout the game.

- In the third quarter, Tyronn Lue hit a three to put the Bucks up by 12. Clyde quipped "that was a Lue-Lue, Gus!". I don't know what that means, but I do know that I've never searched so feversihly for sharp objects in my dorm room.

- Milwaukee has a dance troupe that consists of old people wearing throwback Bucks jerseys. Their jersey numbers appear to be their ages. I have no joke.

And that is all. The Knicks play Washington tonight, and the three new guys still aren't expected to participate. Game thread will be up this evening. Before that, we're gonna take a look back at the legacies of Jamal Crawford and Zach Randolph. Peace.