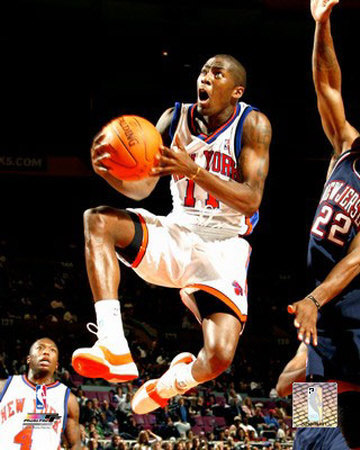 On Friday, Donnie Walsh managed to completely change the face of the Knicks franchise by trading away just two players. Zach Randolph was one of these two, but I don't think his departure had as much of an effect on the makeup of the team or the feelings of the Knicks community as did the trading of Jamal Crawford. While Z-Bo was just coming into his own in New York, Jamal had long been one of the signature faces of a struggling franchise. We must pay tribute to Crawford as he continues his career across the country in Golden State.

Jamal Crawford was acquired by the Knicks in August of 2004, and since that date, he's made us alternately jump for joy and claw our eyes out. Throughout the years, Jamal's otherworldly talent and basketball superego have been in perpetual struggle with one another. He sincerely believes that he can hit every shot on the floor, which has made for some of the most invigorating moments in the last decade of Knicks basketball. Today, we'll celebrate the spectacular Knick career of a beloved combo guard gone West. I've rounded up my favorite videos of Crawford's penchant for the dramatic. Enjoy.

November 18th, 2004: "I honestly practice those kinds of shots all the time," Crawford said. "I felt comfortable. I told coach I could knock it down."

March 23, 2005: This one came in a rather chippy blowout of the Celtics, during which Crawford drew a rare technical (one of 7 total techs handed out in the game).

April 7, 2006: Jamal's third game-winning basket in as many games. Crawford was perhaps the only player to really flourish under the coaching of the amboinable man-demon, and his chief contribution were clutch heroics. After this particular buzzerbeater- "I love that moment. I honestly do," Crawford said. "I've always been like that as a kid, I always wanted the ball late."

November 8, 2006: Perhaps the best example of Crawford's unique ability to stop your heart. This is Jamal Crawford encapsulated in one terrifying sequence. Tightly defended in the waning moments of a tied game, Crawford dribbles freely between his legs and around his back, turns the ball over on an absolutely bone-headed pass, and then steals it back and cans a 26-footer to break the tie, leaving ample time on the clock for the Nuggets to retaliate (J.R. Smith missed a layup if I remember correctly). These are the sort of "NO! YES! NO! YES!" antics that made him such a divisive character amongst Knick fans.

January 26, 2007: Absolutely unbelievable. My thoughts at the time: "I picture Dwyane Wade, James Posey, and Dorell Wright sitting at Jamal's house right now. They're at a well-lit table in an otherwise dark and smoky room. Jamal emerges with a heaping plate of food, and says "Would you like some pancakes, bitches?"

February 13, 2007: Eddy Curry joined the Knicks in 2005, and when he was on his game, much of his success could be attributed to uncanny chemistry with Crawford that dated back to their Chicago days. Late in the game and off a rebound, there's no way this was pre-meditated. Jamal and Eddy just always had that kind of ESP.

November 26, 2007 and January 7, 2008: Crawford's patented shake-and-bake move was at its best last season. Deron Williams and Kirk Hinrich both needed hugs after they got shook.

And that's how Jamal Crawford handled his business as his Knick. Troublesome as it was, we'll miss the thrill that came every time JC had an open look or a one-on-one with an opposing guard. Things didn't always work out like they did in his head, but when they did, Jamal could bring the house down. It's also worth adding that we're talking about one of the most amicable, good-hearted Knicks in recent memory. In 2005, Crawford donated a $100,000 basketball gym to his own Rainier Beach High School. I can also personally attest that Jamal's as easygoing and congenial as basketball players come, and you can tell from this weekend's interviews that he'll be sorely missed in the locker room.

To a nice guy that stuck it out and stayed flashy through Knick struggles, we bid farewell. P&T wishes Jamal Crawford the best of luck in Golden State and anywhere else basketball may take him. Farewell to Zach Randolph, as well. We hardly knew ye, Z-Bo, but you sure made the last year interesting.