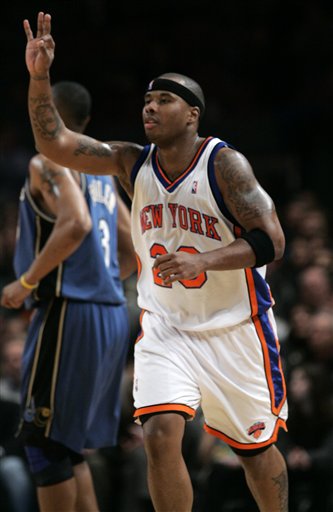 I continue to underestimate this team. Playing with only seven men and less than 24 hours removed from a blowout loss in a different time zone, the Knicks came alive last night to defeat the sorry Washington Wizards in NY. They stayed above .500 for one more day, and did it in front of a rocking MSG. Some notes:

- When you've got only 7 guys, it takes massive contributions from a couple people to make anything happen. Well, we got that. Check it:

- Quentin Richardson was furious at the loss to Milwaukee, and unleashed his fury on the net. He buried 7-13 three-pointers (including 6 in the first quarter alone, tying John Starks for the Knick quarter record) on his way to 34 points. Q also grabbed 12 rebounds and went toe-to-toe with Caron Butler all night.

- Wilson Chandler's shot has been a little off since the deal, but he overcame his struggles to shoot a respectable 7-16 from the field and drop 23 points. Wilson must also be commended for 6 ferocious rebounds against the bigger Wiz.

- Nate Robinson's another guy who seems affected by the trade. He's dealing with the stress by reverting to his old showboating self. He put filthy crossovers on Nick Young, threw superfluous wraparound passes to nobody in particular, and committed silly fouls but who's to argue with 27 points on 10-14 shooting, as well as 6 bounds and 6 assists?

- Finally, give it up for David Lee and Chris Duhon. Lee was a monster around the basket, and finished with 22 points and 12 assists at the 5 spot. Duhon struggled at times, but got 11 assists and 5 boards to go with his 10 points.

- Tim Thomas, Al Harrington, and Cuttino Mobley were all in the house, and all seem legitimately psyched to be Knicks. We got interviews with each of the guys, all of whom are ecstatic to participate in D'Antoniball. And you know what? I'm gonna give Tim Thomas a clean slate for his second go-around in New York. If P&T existed in 2004, TT would've been a major goat around here. He was always an infuriatingly talented player who just never put in the effort. I'm willing to give Tim a chance, though, since he seems like a nice dude and sounded pretty excited when interviewed.

- How on earth are the Wizards so bad? Even without Arenas and Haywood, they've got two All-Stars, size, and a decent bench. I don't see Eddie Jordan staying employed for much longer. The guys at BF are inflicting a little frontal lobe damage over this whole thing, and it's hard to blame them.

That is all! It was an exciting win, and the Knicks will have a full rotation and a little head of steam going into Tuesday night's game against Wally Szczerbiak and the Cavs. The Garden braces itself for a visit from Wally World.