Last night's game got me pretty worked up, but not in the way you'd think. The loss was awful, but that was coming. The Knicks don't have much offensive punch anymore, and the three-point defense was never there. The Cavs are one of the best teams in the East, and would smother New York with or without the recent trade. They've got size, shooters, and LeBron James. Add a dash of allspice and that's the recipe for beating the Knicks. Al Harrington and Tim Thomas had active but kind of spastic debuts. They played, you know, like guys who'd never met their teammates before. They'll start to fit in. Now that there's a plan and some hope, I've almost come to terms with losing.

That said, this is crazy! That's ostensibly a game recap, and there's only one paragraph about the game. I wanna know if Nate Robinson's groin is alright! The media are getting way prematurely pumped about this nonsense, and LeBron totally feeds into it:

"I think July 1, 2010, is a very big day," James said. "It's probably going to be one of the biggest days in free-agent history in the NBA. So a lot of teams are gearing up to try to prepare themselves to be able to put themselves in position to get one of the big free-agent market guys."

"Now finish up and go fetch me a sandwich."

Listen, I understand that it's fun to be hopeful, and there's no harm in looking forward to something. But this is silly. The summer of 2010 is so far away. There will be two Christmases between now and then. You'll probably have two birthdays (I'll have six, but that's another story for another time. Let's just say I'm in college but was born in 2004.) before LeBron is even a possibility. In that time, James may be be elected to state office in Ohio, enroll in Akron University and work toward his degree, or grow an ornamental appendage to fend off predators. You think the Knicks would want LeBron if he had antlers? (Yes, definitely, but I'm trying to make a point here). Let's chill a little bit, eh? I've got a solution to help you do just that. 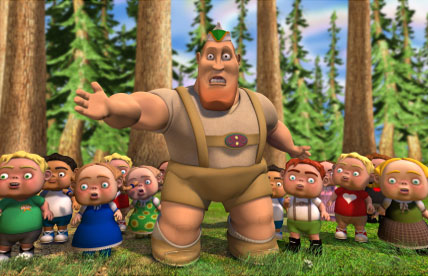 Here it is. It's Hoodwinked 2: Hood vs. Evil. It "will find a teen such as Red Riding Hood who will be training in a distant land with a mysterious, covert group called the Sister Hoods. When Red and the Wolf get called upon by Nick Flippers the head of the Happily Ever After Agency over to investigate the disappearance of Hansel and Gretel". I'm sure it's gonna be just as great as Hoodwinked the first. And guess when it comes out? 2010! Thus, if you really must focus your hopes on an event two years in the future, pick this one. It's more concrete, bound to please, and doesn't make the New York media tweak their nipples in delight.

2010 is going to change this organization, LeBron or not, but it's too far down the road to be making such a fuss. So save your breath, settle down, and shuffle your next decade's schedule in anticipation of some animated fun for the whole family.