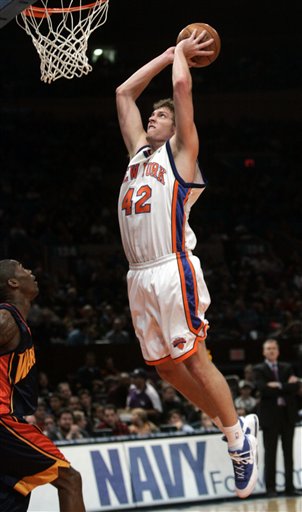 Don Nelson will see this in his sleep. (AP Photo/Frank Franklin II)

I wasn't gonna watch this one. I popped MSG on to catch a bit of the first quarter before I left the house, but things got crazy. Two and a half hours later, I was looking back at a record-setting game that was exactly the kind of matchup you'd expect from two of the league's fastest teams. If you missed, you missed the Knicks setting a couple team and individual records en route to an offensive extravaganza. Let's recap:

- 82 points in the first half. 43 in the second quarter alone. Both are Knick records at MSG. 138 for the game ain't too shabby either. How, you ask, do the Knicks manage those numbers? Well, one factor was hot three-point shooting. As a team, New York was 13-27 from downtown. Another was the Warriors' utter ineptitude on defense. I don't think I've ever seen such bad help. Chris Duhon and David Lee ran the pick-and-roll to death tonight, and Golden State didn't do anything to stop it. It's like they'd never seen one before. The closest the Dubs got to stopping Duhon's antics was a zone defense, and even that fell apart as soon as someone got into the paint.

- I miss Jamal Crawford. I really do. He's such a nice guy, and such a captivating player. MSG played a nice tribute for him, and he got a very warm ovation from the crowd. Good to see.

- On the other hand, Jamal went 6-20 for 21 points, 10 boards, and 5 assists in his return. The side dishes are nice, but I'll trade that shooting any night.

- I'll especially trade it when I'm getting 13-25 (including 5-7 from three) for 36 points and 12 boards from Al Harrington. He was a bully, too, beasting over smaller folks in the paint and finishing ferociously around the rim. Guess he had something to prove.

- Speaking of Harrington's abusing people, this may be the only team the Knicks will face in which they have size mismatches in their favor. Quentin Richardson, for instance, got to back down guys like Crawford and Marco Bellinelli, while Harrington saw time against the shorter Corey Maggette. Credit Duhon with spotting these mismatches and feeding the post when he saw fit.

- Chris Duhon set the Knick record for assists in a game with an unbelievable 22 dimes (breaking the record set by Richie Guerin in 1958), and just ran the show this evening. He cut into the paint and got anything he wanted, partly because the Warriors' post defense was sound asleep, and party because he and David Lee are starting to click very nicely. Around half of Du's assists came on routine pick and rolls, hitting Lee or Harrington for easy dunks. He was fantastic out there, and I'll take a 22 to 3 assist-to-turnover ratio any night.

- Your other Knick of the night is Mr. David Lee, who put up Dwight Howard numbers (and actually out-performed Howard himself tonight) and became the first Knick to log 30 and 20 since Patrick Ewing in 1994. 37 points (16-29) and 21 rebounds set a pair of career highs for D-Lee, and as Coach D noted, Lee could've been looking at 50 if it weren't for a few bad rolls and some foul trouble. Unbelievable nights for Harrington, Duhon, and Lee, and fantastic chemistry between all three of them.

- Do they purposely seat hot girls behind the coaches? I swear, anytime networks show a shot of a coach pacing the sideline, I find myself fixated on some hotties in the background. Maybe I just have low standards.

- Jill Martin's "Gimme a Minute" halftime interview was with Fat Joe, who proclaimed that the Knicks were "number one in the world". Listen, Fat- can I call you Fat?- I love the optimism. It's great to see that celebrities are sticking with the Knicks. But that's just false. The Knicks aren't number one in the world in anything. Except for maybe sexual harassment allegations and DePaul alumni. Maybe that's what he was talking about. Maybe Fat Joe comes to Knick games not for the basketball, but rather in hopes of seeing some sexual harassment.

- In the second quarter, Tim Thomas absolutely thrashed C.J. Watson's shot off the backboard. In the third quarter, David Lee threw an alley-oop to himself on the fast break. In the fourth, Thomas backed down Anthony Randolph and then dunked quite forcefully on his head. Highlights for all.

- If Anthony Roberson got two more points, then all 7 guys who stepped on the floor would've scored in double figures.

- All in all, it was a fast-paced, defense-free battle between two of the team's top offensive squads. What made the difference? I'll say point guard play. The Knicks had Chris Duhon to run the show and get everybody else easy looks. The Warriors had, well, Jamal Crawford, which isn't bad, but as we know, doesn't always win you games.

Anyway, surprisingly exciting game, and it was good to see a few different guys break out big time. The schedule gets tough going forward, but the Knicks sit at .500 for now, and all is well. I'm heading back to school tomorrow, so we'll talk later on. Peace.