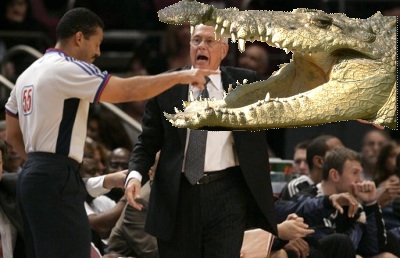 What a game! I've been lying incapacitated in bed all day, and this seesaw of a game nearly got me out from under the covers like the grandpa in Charlie and the Chocolate Factory. The Knicks looked alternately brilliant and befuddled, while the Bobcats used a balanced attack and hot shooting to stay in it. But that's not all.

You know what this paragraph is. This is the paragraph where I tell you that, miracle of miracles, the bloodthirsty man-demon stalking the Charlotte bench was soundly vanquished tonight in New York. More on that in the notes.

- Mike Breen shared the information that Mike D'Antoni had "quick decisions" scratched on the pre-game chalkboard. I like that, and the Knicks took to it as well. Chris Duhon looked sharper than usual, hitting cutters rather than repeatedly taking the easy route and feeding the outside. Crawford and Robinson got in on the action as well, each contributing five nice dimes. I'll take those precision passes to the basket over bailouts to the perimeter, even if it results in two or three assists. Or 21. Quick decisions on defense are money as well. Let the Knicks springy little youngsters attack some passing lanes and gamble on some hospital passes. It gives them confidence and creates fast breaks remarkably often.

- Mardy Collins was a no-show in this one. Some of you might be celebrating Mike D'Antoni's newfound wisdom, but bite your tongue. It was the fiendish, bespectacled bloodsucker on the opposing sideline who feasted on Mardy's unsuspecting flesh. The demon feasts on the weak and hapless first, much like a shark in the sea, only with more rows of teeth.

- Michael Jordan was seating courtside with Ahmad Rashad. No big deal. What really piqued my interest was Candace Parker sitting alongside none other than Charles Oakley. What those two were doing together, I don't know. I do know that Charles Oakley awkwardly shared the information that he pitched a television show to MSG and got painfully rejected. Al Trautwig greeted that news with a blink and a quick transition to the next question. Think I can't beat that awkwardness? I can, fair lady. Said Walt Frazier when Mike Breen noted Parker's talent, "yeah, and she's attractive too!". When Breen mentioned her fiancée, Shelden Williams, Clyde responded that Shelden plays in Sacramento, and that, "there's hope for somebody! That's far away..." Mike Breen swalloed a Xanax and lay his head on the desk.

- When the Knicks looked good, things were tight. They played scrambling, handsy defense, and got steals and deflections for fast-paced action down the other end. When they looked bad, dammmmn. Passes sailed yards away from their targets, out-of-rhythm, contested threes were missed, and defensive assignments were blown.

- Looking at the good times, I love that.

- D.J. Augustin is pretty good, but his accent isn't as funny as Gallinari's.

- Patrick Ewing Jr. was in the house. Keep your head up, Pat. We love you.

- I'm ready to go to bed, but let's give a hand for our three demon-slayers of the night. Nate Robinson had a brilliant 24 first-half points, including 19 in the second quarter alone. He couldn't miss, but even better, didn't lose his mind later on. Pat on the back to Zach Randolph, who did his best impression of a defender against the much burlier Emeka Okafor, and shot the lights out on offense. 25 and 13 on 10-15 shooting for Z-Bo. Finally, Wilson Chandler gets applause for an understated but meaningful 18 points on 6-14, 7 bounds, and 3 blocks off the bench. Those 3 blocks were key, and the scoring is more than even we homers expected. Sure, he missed Gerald Wallace twice in crunchtime to let the game get close, but we'll look the other way in a win. Kudos.

That's it for now, kids. The fiendish ghoul was defeated, and the Knicks are back at an even .500. Next game is Friday in D.C.