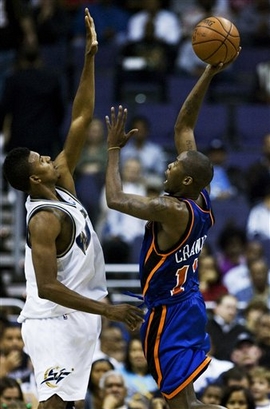 Good morning afternoon, friends. Sorry this took so long. It's not easy to post recaps on a Friday night when you're in college (it is when you're sick and rarely leave bed, but leave me alone). Last night's game was a glimpse into D'Antoniball at its sweetest. Both teams caught the run-and-gun bug (note: don't refer to that as simply "The Bug".) and played a fast-paced, crisp game with leads growing and shrinking faster than you could feel feelings about them. I'll get some complaints out of the way, and then give you a recap of some promising themes and individual performances.

- The Knicks shot a ghastly 9-19 (47%) from the free throw line. That can't happen, and would've been the number to point out if they'd lost.

- Though the Wiz don't really boast what you'd call a powerful frontcourt without Brendan Haywood, Etan Thomas, Andray Blatche, and Javale McGee (more on this guy later) caused plenty of problems. The Knicks were outrebounded 50-36, and while I can't find the points in the paint stats, they got a bunch. I know this.

Moving on, let's take a look at how some individual Knicks fared:

Chris Duhon- Chris had the sort of game we expected from him going into the season, and looked pretty solid. He had a quiet but meaningful 6, 12, and 7 in 36 minutes, and hit a huge three to get the Knicks back ahead when they briefly fell behind in the fourth quarter. I'd like to see Chris attack the rim a little more and hit cutters more consistently (Try alley-ooping David Lee. It'll work. Can't say the same for Randolph.), but it's hard to argue with 12 assists and 0 turnovers from your starting point guard. Hats off to Chris.

Wilson Chandler- Wil got the start tonight, and I was sure this would be the night we learned his limitations and remembered that he's young and better on the bench. I was very pleasantly surprised. Added to the lineup to match the more perimeter-oriented Antawn Jamison, Chandler didn't disappoint. Jamison had 24 points, but shot more threes (2-7) than he'd probably like to, and looked frustrated and out of rhythm most of the night. Wilson deserves credit, also, for being the Knick with the quickest response time on help defense. Meanwhile, he continued his offensive renaissance with 17 points on 8-12 shooting. More hats off to Wilson.

Zach Randolph- At what point do I say I was wrong for wanting to trade Z-Bo for Darko Milicic this summer? Probably not after 5 games, but what the hell. Zach's shining in the D'Antoni offense, and was an inside-outside threat last night. He'd bull through the paint for hook shots and layups, and then step outside for smooth 18 to 20-foot jumpers. There will always be a few possessions where everybody stands and watches Randolph shoot a contested jumper, but he's working more and more within the flow of the offense and looking impressive while he does it. Zach also skyed- yes skyed- for a few rebounds, and pulled down 13 in total. I'm running out of hats.

Jamal Crawford- Jamal Crawford is alternately so exciting I could poop and so aggravating I could...well...poop. I guess that's more of my problem than it is his. The point, though, is that Jamal's fourth quarter performances are like a roller coaster, if roller coasters shot you into the air from 3 steps behind the three-point line, contested, early in the shot clock at the end of a close game. Jamal followed his fourth quarter shenanigans, which included the aforementioned 28-foot brick and a really poor attempt on a fast break, with a brilliant drive to the rim and a long and-one, so I can't stay mad at him. He also finished with 23 points, so nice job, Jamal. The hat's staying on, but nice job.

David Lee- If poor David Lee has to box out 7-footers every night, his rebounding numbers are going to go way down. Props to him, though, for keeping his head up and dropping an efficient 13 points despite only snaggling 1 rebound. Word has it Dave was put on an intravenous supply of rebounds after the game. You know, to keep him nourished.

Anthony Roberson- Roberson can shoot, but probably shouldn't shoot quite so much. More importantly, though, he can play some pesky-ass defense, and will likely be getting more minutes.

Nate Robinson- Nate was generally under control, hit 8 of his 15 field goal attempts, and dropped 17 points to go with 3 steals on the other end. He's the embodiment of the D'Antoni system, and the game very noticeably changes when he's on the floor.

Quentin Richardson- Since I've mentioned everybody else, keep doing what you do, Q. Richardson hit a couple threes and did as noble a job hanging with Caron Butler as anybody possibly can. That guy's really good.

Mardy Collins- Oh hey! I forgot! Mardy got 10 minutes of his own and, well, he didn't break anything and hit his only field goal attempt. He also played some nice defense on one play, or at least that's what Gus Johnson said. Hats off to Mardy!

- Javale McGee is immensely entertaining, both in the basketball sense and the schadenfreude sense. J-Mac (too soon?) threw down a couple monstrous alley-oops and swatted a couple shots with his 9'8'' wingspan. Then again, he also completely shanked two alley-oops and scored at least 4 points for the Knicks by goaltending shots. You know how when giraffes are young they're still getting used to those long limbs and they trip all over themselves and look generally awkward? No? Oh. Nevermind.

- Holy crap, the Wiz miss Gilbert Arenas. Their offense sometimes made me say "god DAMN that's ugly offense." And I watch the Knicks every night!

- Kelly Tripucka provided the color in Walt Frazier's absence, and did a pretty nice job. I have very little recollection of what he said, which means he wasn't irritating, which mean's he was better than 75% of color commentators.

- The Wiz had one of those "Kiss Cam" things going between quarters, and they tried to set up Mardy Collins and Anthony Roberson. That's soooo awkward, cause like, they just broke up.

In short, this was an enthralling win, and it put the Knicks above .500 after three or more games for the first time since January of 2005 (thanks Mase). The Wiz are a sorry team without their injured star, but the Knicks won this one on their own accord, with dedication to pushing the ball, and shot selection that was bold but not ridiculous. The next game is Sunday at 3 p.m. against the Jazz, which is gonna be a challenge. For the Knicks and for me. Who wakes up before 3 on a Sunday?