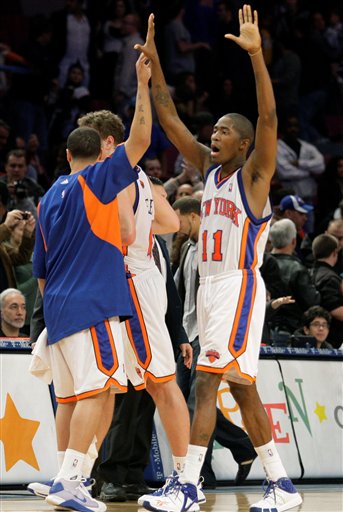 Now that's something we haven't seen in years. After a troublesome first half, the Knicks regrouped, retooled, and hustled in the third and fourth on their way to a win against a superior Jazz team. Though Utah was without Deron Williams, they moved the ball well and got hot from the field, but the Knicks did things we've haven't seen in years to grab their fourth win. Notes:

- Shooting 11-24 (46%) from downtown is very solid, but I'm more pleased with 24-29 (83%) from the line. The Knicks benefitted from a few home calls, but the free throws were mostly a result of attacking the rim and hustle under the glass. You can get away with shooting only 42% from the field if you hit your threes and free throws.

- The defense, which gave up 29 assists and 51% shooting, didn't necessarily look great on paper, but it was the right kind of play on that end. Guys were scrambling, doubling quickly and decisively, and playing passing lanes hard, particularly in the second half. Knicks like Robinson, Duhon, and Crawford can really shine in a defense that focuses on overplaying for turnovers. Each had multiple steals, and the Knicks forced 20 turnovers overall. Given that we'll be undersized every night, this kind of ballhawking in the backcourt is a great way to go. And it's fun to watch.

- That transition in the second half was fantastic, and that kind of thing is what's making the stark difference between D'Antoni and Isiah apparent. At halftime, Kelly Tripucka explained that "Utah is known for their execution, and right now they're executing the Knicks to death". Despite the contextual bizarrity and inadvertent punniness of that statement, Kelly had a point. Boozer, Brewer, and the rest of the Jazz were running their set offense cleanly and efficiently in the first half. In the second, it was the aforementioned ball denial and lane jumping that threw a wrench in the Utah machine. D'Antoni played his ballhawks and coached the guys to be pesky and nasty on the defensive end. And, shit, they responded! It sounds simple, but when's the last time you saw the Knicks make a wholehearted, effective adjustment at halftime?

- Speaking of that execution, what's up with the lazy passing? The last two games have been filled with telegraph passes and errant throws out of bounds. I guess it's a new offense, but the unforced errors could be cut down.

- Man of the night was Jamal Crawford, who took mostly responsible shots and dropped an efficient 32 points on 10-17 shooting and 5 threes. He was hot from everywhere and made a point of attacking the rim and getting to the free throw line. Don't forget his two steals, either. He's been putting them long arms to use off the ball and denying the ball from his man better than ever.

- David Lee seems to be getting a bad break on everything- tight rims, no-calls...nothing's going his way. But he soldiers through it all. One of these days the basketball gods will be generous and Lee's gonna have a career night. Book it.

- Speaking of which, Phil Weber could have played Viggo Mortensen's part in Eastern Promises.

- Chris Duhon had a fantastic night with 16 points, 9 dimes, 5 boards, and 3 steals. He also had the surprise of the night, when he drove left baseline and threw down with two hands. Who knew he could do that? Duhon's gotta get his jumper falling more consistently, but he's been increasingly impressive on both ends of the floor. I'm interested to see how he does against a superstar point guard. 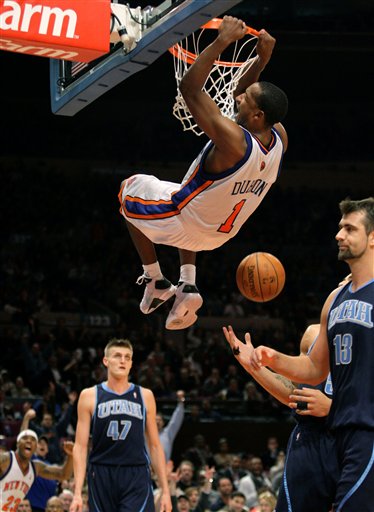 - Zach Randolph, keep doing what you do.

In short, the Knicks kept it close, made adjustments at halftime, and punished in the second half to beat a previously undefeated Utah team. You know, like a halfway decent basketball team does. It was a refreshing departure from the last few years, and something I'd love to see again. The Knicks are on a 3-game win streak heading into Tuesday's matchup with San Antonio. 4-2, eh? Eh?