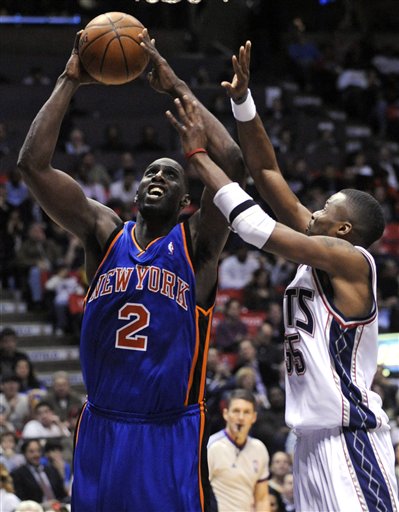 This is the type of thing we haven't seen from the Knicks in years past. After being completely embarassed by Lucious Harris and the Nets in the first quarter, the Knicks changed up their style, asserted themselves on both ends, and willed their way to a win. Some notes:

- Lucious Harris looks as young as ever in his return to the Nets. He was getting to the basket at will and hitting step-backs over whoever the Knicks threw at him, as well as hitting the Net big men with gorgeous passes to the basket. Later on, though, the Knicks managed to force him away from the basket a little, and capitalized when Keyon Dooling replaced him off the bench.

- Mucho credit goes to Al Harrington and Tim Thomas, the two New Jersey natives who really stepped it up last night. Harrington played like Jesus Christ, Mohammed, and Hannukah Harry all rolled into one last night. He had his outside shot going, but did us one better by taking it to the hole and getting fouled for 15-16 from the charity stripe. Maybe he's realizing that he's quick for a man his size, and has the speed to beat big men, with the size to beat frailer defenders. 13 rebounds are another sign of his hard-fought night. Absolutely phenomenal game, and he would've had 40 if he wasn't being teased while he shot free throws in garbage time. Tim Thomas had 26 points of his own off the bench, and got to the line 6 times.

- As a team, the Knicks connected from the stripe 32 of 35 times. Compared to 10-17 for the Nets, that's fantastic. That kind of aggression can win the Knicks games against better teams when the threes aren't falling (9-26 last night isn't terrible, but not great).

- Wilson Chandler must've been deeply affected by my post yesterday, because he looked much more patient and relaxed with the ball in his hands, and boy did it pay off. 24 points on 10-12 shooting, including one back-breaking four-point play down the stretch, along with 9 rebounds, was exactly what we needed from Wil.

- David Lee had 10 points and was pretty animated throughout the night, but took a hard fall when he landed on top of Vince Carter, and left the game with a bruised back. No reason to believe he won't be fine.

- Chris Duhon didn't have his shot going (2-9) but provided a solid 10 and 10, while doing his darndest to hang with the reincarnated Lucious Harris. More interesting, though, were the unsual ten full minutes he got on the bench. During this stretch (mostly in the second and third quarters), D'Antoni had Jeffries bring the ball up (not good for the heart, but it worked), and then instituted a sort of drive-and-kick halfcourt offense. Harrington, Chandler and Thomas would either beat their men off the dribble or kick it out to one another for three-point attempts. It was an oddly huge lineup for this Knicks squad, but it did seem to work. Particularly when guys are committed to getting to the basket, New York may be able to live without Duhon for stretches. It was definitely better than the total standstill that occurs when Anthony Roberson's handling the ball.

- The ref's signal for offensive basket interference is making a circle with the pointer and thumb of one hand and then tracing around it with the pointer finger of the other hand. Like this:

Does that make anybody else giggly?

- One side note is that, as mentioned below in the Fanshots, Cuttino Mobley has announced his retirement. While we we'll miss what Mobley could've contributed, this does open up a roster spot and give Donnie Walsh a little room to work. It remains to be seen whether he'll try to turn this into a 2-for-1 deal for Marbury, or whether he'll just get out and sign another point guard or a defensive big man off the waiver wire or the NBDL. Many have pointed out that Dee Brown was released from Washington yesterday. He could be an option to back up Duhon, at least while Nate is injured.

That's all for the moment. The Knicks head out west this weekend, and will be in Sacramento on Saturday. Hopefully Al Harrington is still playing like an immortal God-warrior, and the Knicks can keep up the effort against the Kings. Peace.