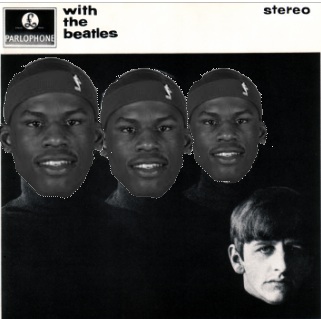 The Knicks started hot, weathered a comeback, and finished strong to beat the lowly Kings in Sacramento last night. Once again, Al Harrington played like an absolute legend, putting up 33 points on 11-20 shooting, including 5 threes. His presence was particularly important in the late third quarter, when the Knicks had squandered most of a 29 point lead. With the gap cut to 12, Al came alive for 11 straight points to end the quarter, and put the game out of reach for good. A few other notes:

- Clyde's jacket last night appeared to be made of actual cheetah fur. Better yet, Mike Breen's tie looked like it was leopard print. Coincidence? Doubtful.

- Besides wearing a flashy tie, Mike Breen gave every impression that he'd had a few shots before the game. He called Spencer Hawes "Steven", Reggie Theus "Reggie Lewis", and pronounced "holiday" as "Hollywood". He also threw up all over the broadcast booth and told Clyde he loved him.

- Wilson Chandler drove in for a dunk in the first quarter and instead of blocking him, fouling him, punching him in the balls, yelling at him, or even pantsing him, Brad Miller just stood there. He had a couple seconds to react, and he literally stood still and watched as Chandler dunked over him. The Kings were not very lively last night. Especially not in the first half.

- Speaking of which, Wilson's a beast of a dunker and gets up pretty damn high. He's gotta stop trying to finesse around people and just go up strong.

- Since Sacramento is as close to Seattle as we get these days, we got a nice look at Nate Robinson's family members in the audience. One guy was wearing a Knicks #4 jersey turned backwards so we could see that the name had been personalized as "NATES COUSIN". I've been in touch with the Knicks organization and several different media outlets, and my sources tell me that was Nate's cousin.

- Cheers to David Lee for 17 points and 19 rebounds with a back that's probably still sore. He made you forget that Sacto had two or more 7-footers on the floor for most of the game. The frontcourt as a whole did a nice job forcing Miller and Hawes to either score from outside or put the ball on the floor, and neither of those two ever got into the flow of the game.

- Al Harrington and Shelden Williams got a bit tangled up and had some words in the second half. I was worried that it would escalate and get physical, if only for fear that they would somehow accidentally conceive a child in the process, thereby producing the most aesthetically appalling human being on the face of the earth. (If you're wondering, by my calculations Shelden would carry the baby.)

- More cheers to Nate Robinson, for a crisp 19 points on 8-15 shooting. He started in place of the ill Quentin Richardson, and was incredibly active throughout the night. Gr8 to have N8 back.

- If you let the Knicks shoot 13-27 from downtown and 15-21 from the line, you will lose pretty consistently.

- Biggest story of the night: JEROME! Big Snacks made a surprise appearance in the late fourth, and did not disappoint. He had a couple points and rebounds in 4 minutes, and we got to see him gallop up and down the floor with that big smile of his, the Knick bench cheering him on the whole way. Gotta love his reaction too:

“These guys know how much I love the game," said James, who made his first appearance of the season and first since Jan. 21 last season. "The know how disappointed I’ve been that I don’t quite fit this system. But they know I still want to play. It’s what we all live for . . . So my teammates saw there was an opportunity for me to get in and they championed it. I appreciate the guys having my back like that because I definitely have their back. You see me every game, I’m cheering for them, I’m hype. I’m living through them. So when I get out there, I’m happy they’re doing that for me too.”

It's truly great to have that kind of playfulness and camaraderie back in New York, and happy players make for big wins. Solid D, timely scoring, and great shooting got it done in Sacramento. The Knicks did what they should've against a lesser opponent. Now things get tough with back-to-back games in Phoenix and L.A. Peace.