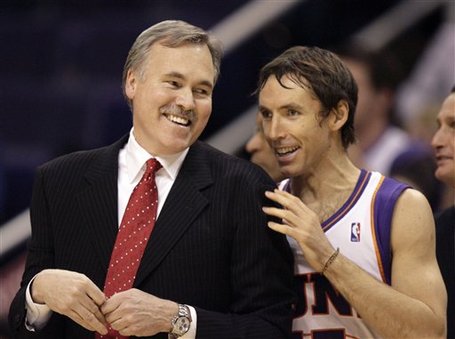 "Live by the three, die by the three", they say. Well, the Knicks almost escaped a death by the three-pointer last night, nearly coming back to beat the Suns in Phoenix, despite 5-37 shooting from downtown. Read that again. 5-37. That's good for 13.5%. That kind of shooting to the Knicks down double digits pretty early, and while the longballs never really started falling, New York asserted themselves in the second half to cut it close. It took a few lucky breaks for Phoenix (Stoudemire nailing a shot-clock beating three, Jason Richardson's miss late in the clock falling directly into Stoudemire's hands) and some untimely misses by the Knicks to let this one slip away. A few notes:

- Mike D'Antoni got a very warm standing ovation from the Phoenix crowd, which was cut short by the blackout starting lineup introductions for the Suns. It's really nice to see how much love they've still got for him, though.

- Al Harrington and Tim Thomas, who'd been hot for a few games, finally hit their respective walls last night. Despite shooting poorly, though, Harrington had himself a nice game. He got his ugly three-pointers up, sure, but after that made a concerted effort to attack the basket and get to the free-throw line, where he was 6-6. It's great to see Al make a big contribution even on a night when the shots aren't falling. He finished with 24 points on 8-22 shooting.

- Shaq and Amare are pretty much impossible covers for the Knick big men, but credit both Lee and Chandler (who, by the way, had 15 points and a bunch of rebounds apiece) with using their fouls wisely. Both fouled out, but not in vain.

- That Hack-a-Shaq method wasn't working so hot, though. The Big Diesel, whose free throw attempts closely resemble a porpoise trying to draw curtains with its flippers (Please don't ask me why I've seen that before. It's a dark era of my life.), manage to drop 11 of his 18 free throws, and was especially accurate down the stretch.

- The Knicks' defense for the Suns' pick-and-roll was a little odd, and I wish someone could get video of this. Basically, Amare would set a pick on Nash's man, which was usually Nate Robinson, and Nate wouldn't even make an effort to fight over the screen. Instead he'd switch to Amare, and then quickly switch again with whoever was defending behind the perimeter. Thus, you'd have Nate on a perimeter player (usually the bigger Richardson or Hill), Duhon or QRich on Amare (not much of an improvement if you ask me) and Harrington or Tim Thomas guarding Nash. This happened maybe a dozen times. That's gotta mean that Nate was instructed to go under the screen, and I trust that D'Antoni's got a good idea of how to defend the Nash-Amare pick-and-roll that he pioneered. I just don't see how Nate switching on every possession works. If he forced himself over at least some of those picks, they'd avoid mismatches, and possibly draw Stoudemire into a few moving screen calls. Again, D'Antoni knows these guys better than any of us do, but it didn't make much sense to me.

- Danilo Gallinari update: Il Gallo's got himself a nice, thin beard. He's also a proponent of the "tap the shoulder then hide" method of annoying Malik Rose during timeouts, as seen in the second quarter.

- Let's talk about those three-point numbers. I know it hurts. The thing is, only some of them were bad shots. Harrington, Thomas, and Chandler got some ugly-ass attempts up, but for the most part it was just players missing shots they'd usually hit. Nate shot an unseemly 1-10, while Al and Tim were each 2-8, and everybody else was 0-11. If anything, I'm a little impressed that the Knicks could stick with the Suns until crunch time even when they missed nearly every open shot from downtown. Some nights the shots just don't fall, but New York nearly stole one anyway.

- Besides my qualms with his defense and those terrible shooting numbers, Nate was probably the single force that kept the Knicks in this one. For stretches, he seemed like the only Knick with a pulse, and was hell-bent on getting to the rim, where Duhon was a more than a bit tentative. While Du seemed content to drive and kick in the face of Phoenix's twin towers, Nate wouldn't settle, and repeatedly knifed his way to the rim for acrobatic buckets. When outside shots aren't falling, I'll take Nate's style over Du's every time.

So, D'Antoni's return to Phoenix didn't turn out so great. The Knicks hung tough, though, and nearly robbed the Suns despite one of the ugliest shooting performances in the history of hands, leather balls, and metal rims. The bad news is they've got an encore performance tonight in L.A., where they'll face the West's best team in an arena where they rarely lose. Some news and game thread coming later.