Share All sharing options for: Game Thread: Knicks at Lakers- 12/16/08 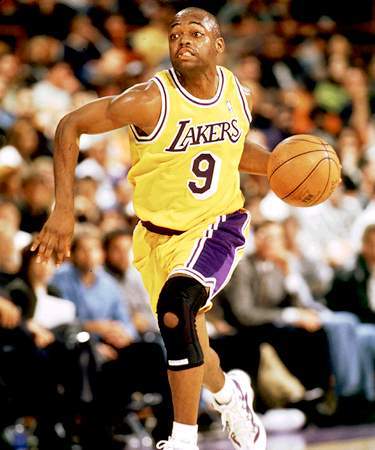 Not feeling punished enough from last night's loss in Phoenix? Well have I got the thing for you. The road trip ends tonight in Los Angeles, where Kobe and the Lakers will play host to the Knick hotshots. Perhaps some hot shooting tonight can balance out last night's near-drunk performance. Maybe just enough to upset one of the best teams on the planet? You never know! What we do know is that Andrew Bynum and Pau Gasol pose a problem just like AmShaq did in Phoenix. Keep an eye on which Knicks attack the rim and try to get those big kids in foul trouble, and how D'Antoni's guards defend the pick-and-roll. Should be xxxciting! Tipoff's at 10:30. Leave them comments, friends. Oh, and would anybody be game for a recap? I've got two finals tomorrow and wouldn't be able to have one up until the late afternoon. Which I guess wouldn't be that unusual, but still...anybody?

By the way, the above jersey falls into the category of "huge jerseys that I owned when I was in third grade that would fit me now but my mom threw them out and I still sometimes have night terrors because of the loss".

Update: Can't believe I forgot. Guess who might be in attendance tonight? I know the game's not at MSG, but can we get a special edition "Gimme a Minute" for tonight?