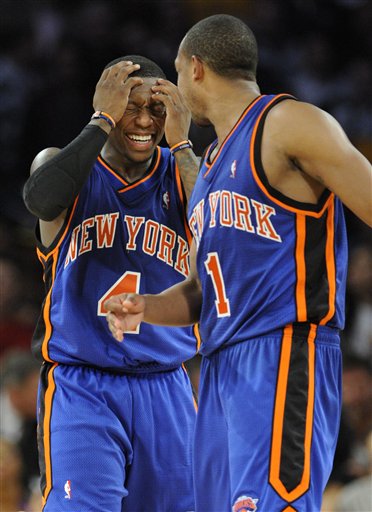 I've had a full night's sleep and a final exam since the Knicks lost a heartbreaker to the best team in the West, but I'm still a little queasy. The Knicks shouldn't beat L.A. They really shouldn't. But last night, they got out to a double-digit lead in the first half, predictably squandered it, and then seemed inches away from every little opportunity down the stretch to lose by just 2. There were so many moments towards the end- Nate's rimmed-out three, Harrington's near-steal off an inbounds, Duhon's seconds-too-early game-winning attempt- that decided the game's out come by a matter of inches or fractions of a second. And that's why I'm still sweating. A couple brief notes:

- Standing, tearful ovation for Nate Robinson last night. Good LORD was he on. 33 points on 9-16 shooting off the bench, including 12-12 from the foul line. Nate was fearless as usual, and was pretty much the only Knick to challenge the Laker big men (minus Gasol, but given Odom's performance, I wonder if that helped them) with any regularity. Duhon had himself a solid game with 12 and 11, including a few ballsy threes, but I still prefer Nate's willingness to slash to the basket and challenge hostile 7-footers.

- The Knicks as a team shot far better from downtown (13-31) than they did in Monday night's nauseating shooting performance. For the most part, I think that's because the forwards and Richardson connected off the catch-and-shoot, rather than trying to create their own three-point attempts. That hot shooting got the Knicks out to the early lead, but you knew the Lakers would come back, and they did.

- Wilson Chandler did a fantastic job on Kobe throughout the game, but L.A.'s second half revival was in no small part a product of The Mamba's second half outburst. The little prick hit an insane array of step-backs, fadeaways, and leaners over the frustrated Chandler. I'm still giving Wil an A+ for making Kobe take difficult shots. That's the best you can do: just defend your hardest and pray he's off his game. Last night, he just wasn't.

- David Lee continues to blow me away. How a 6'9'', 240 pounder manages to outperform Andrew Bynum is beyond me. (6 extra minutes helps but shut up.)

- I know you'd rather not relive the pain, but one particular play that I mentioned epitomized the Knicks' hard luck down the stretch. On an inbounds play with less than a minute to go and the Knicks up 1, Trevor Ariza can't find anybody from under the basket for about 90 seconds, then lobbed the ball towards halfcourt, where Al Harrington extended fully to tip the ball, only to have it snatched away by Lamar Odom, who, in an inexplicable seizure of competence, threw an alley-oop to Trevor Ariza. Yes, it took an iffy non-call, an excellent but ineffective Knick deflection, and Lamar Odom's first intelligent basketball play since middle school for the Lakers to take the lead. But somehow they did. And this is why, at 1:30 a.m. this morning, I was standing naked in the shower with my head buried in my hands.

- You know what's funny? With the Knicks down 1 and less than a minute remaining, the guy I'd give the ball was sitting courtside in a black leather jacket. - Yes, Stephon Marbury was there, and yes, he still loves attention.This is also an area in which we sorely miss Jamal Crawford. Nate's got the skills and the balls, but not necessarily the physical advantage, to connect down the stretch when the defense is most focused, and nobody else on the team seems willing.

So, the road trip is over. The Knicks went 2-3 away from the Garden, and now sit at 11-14. Having previously declared the season's turning point as December 4, I'm going to deem the Knicks still very much alive. Not only did they stay near .500 by beating New Jersey, Sacramento, and Detroit, they took every single game- including toughies in Atlanta, Phoenix, and L.A.- right down to the wire. Considering that New York was a few bounces and calls away from going undefeated in their last 6 games, I'd say the Knicks are still in the picture. If they can keep up their generally solid play (which, granted, isn't a given), then D'Antoni's guys look to be one dose of crunch-time heroicism away from making a playoff run. If someone can step up as the Knicks' late-game leader, that might make just the difference to push this squad to the next level. Last night's game in Los Angeles was an example of how tough they can be and how far they've come. Now it's a matter of stepping it up and turning those near-wins into real wins.