Could the Knicks have a snow day?

Share All sharing options for: Could the Knicks have a snow day? 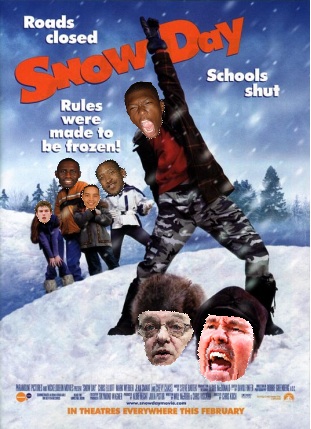 My little brother's got one. Yours might, too. When I awoke this morning, (at noon, bitches!) I saw a world blanketed in fresh snow, with plenty more parachuting down from the blank sky above. New York is expected to get upwards of 6 inches this afternoon, with snow changing to sleet and ice as it gets colder. Now, the Bucks flew in on Wednesday, and they've surely seen worse in Milwaukee, but might we be getting a snow day? Has there been one before? Frank Isola's got some answers:

The last time the Knicks had a home game postponed, Don Nelson went bar-hopping on the snow-covered streets of Manhattan. That was back on Jan. 7, 1996, a little more than two months before Nelson was fired despite being nine games over .500.

In ’96, the Sonics were already in New York but the league and the Knicks still decided to postpone the game. The Milwaukee Bucks arrived in Manhattan late Wednesday night and as of noon today the Knicks are still planning to go ahead with the game,

I guess the main question is whether the roads truly become "very hazardous or impossible", as weather.com predicts. The game will probably proceed without problem (though it'll be sparsely attended)...unless Nate Robinson manages to hijack a snow plow, thus preventing the roads from being cleared and setting off a wild day of laugh-out-loud fun for the whole family!