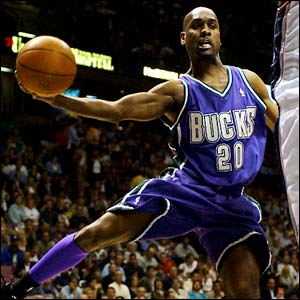 It's a snowy Friday night here in the metropolitan area, so expect tonight's Knicks matchup to echo a little more than usual. The Garden may not have its usual roar, as two factors- 1. The snow and 2. The Milwaukee Bucks- aren't exactly magnets for weekend crowd. Nonetheless, I'll be around to keep track and recap New York's third game against a team that's beaten them pretty badly twice this season (though the second time was during the exchange phase of the Randolph and Crawford trades, when D'Antoni had a rotation of 4 players, 2 ballboys, and a man he found scalping tickets on the corner of 33rd and 7th).

After falling to them twice, the Knicks should be dead-set on dismembering what, I assure you, is a worse basketball team. It's either that or have everybody forget the near-wins in L.A. and Phoenix. If New York is evolving into a squad that beats worse teams and competes with better teams, then we should be looking at 12-14 by tomorrow morning. For real.

It'll take dilligent post play from David Lee and whoever else is posing as a big man this evening to keep Andrew Bogut away from the rim and limit his easy attempts. Chris Duhon and Nate Robinson will have to be equally attentive to Ramon Sessions' antics with the ball, as that fine gentleman nearly dropped a sextuple-double last time he came to visit. Meanwhile, Michael Redd's either been injured or relatively quiet in the Bucks' two matchups with New York, so be wary of #22 releasing some of the pent-up scoring prowess he's spared the Knicks so far this season.

I think I'd like a Gary Payton Bucks jersey, but it's sort of a tragic garment to wear in public.

If you're snowed in like I am and watching the game, go ahead and share your in-game comments, and remember to head on over to Brew Hoop for some bonafide Bucks coverage. Light up the fireplace, find a warm blanket, and let's curl up together and watch some basketball. Pause.