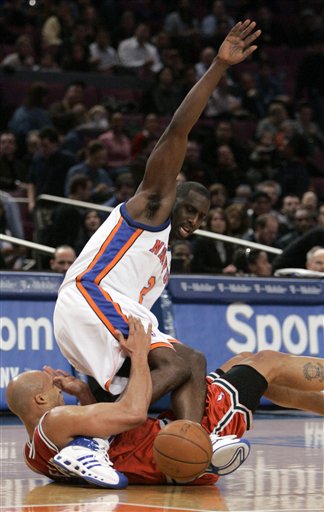 In lieu of fundamental defense, Tim Thomas resorts to grinding up on the fallen Richard Jefferson. (AP Photo/Mary Altaffer)

Not all losses are created equal. There are two-point losses in L.A. where you say "look at these Knicks, trying to compete with the Lakers! Those little upstart punks are really something!". And then there are ones like tonight, that just don't tickle your fancy quite as much. Returning to the Garden after a five-game road trip, the Knicks laid a big, fat egg against the Bucks. With their third straight big victory over New York, Milwaukee seems to have stepped in as the Knicks' unicorn this season (damn right that was a Gone In 60 Seconds reference). We'll recap this one quickly.

- Al Harrington arrived late because of traffic on the Hutch, and his shooting was sorely missed in the beginning of the game (it's also possible that he would've been cold and exacerbated the problem, but whatever). The Knicks simply couldn't hit an outside shot. I can't say for sure, but I'm pretty sure New York didn't connect on a single jumper in the first quarter, and fell behind 24-15 after 12 minutes.

- Harrington made his return, and in the second quarter lead a rampage to bring the Knicks within 4. But after Nate Robinson threw away a bad pass, the Bucks came the other way and hit Michael Redd for a wide-open three. They never looked back.

- That was actually one of two plays Nate made that directly set up a Milwaukee three-point attempt. Another was a ferocious rejection of Charlie Bell that, alas, went straight into the hands of Tyronn Lue, who hit an uncontested three.

- Speaking of Lue, when did he learn to hit fallaways like Kobe Bryant?

- Nate's defense on the other end was pretty solid (at least in the first half, when I was paying attention). He fought hard over picks on Luke Ridnour, but the Knick big men weren't really in sync. Lee kept switching off of the pick-setter anyway, which left a big man open cutting to the basket.

- Milwaukee's best weapon against the Knicks seems to be their ability to clog the paint. Duhon can beat his man off the dribble, but once he gets into the key, everybody collapses and makes him look pretty bad. Both guards had quite a bit of trouble feeding cutters because of Milwaukee's handsy, and they were forced to either turn the ball over or kick the ball out to New York's terribly cold three-point shooters. (23 turnovers, 7-21 from downtown. Not good). I guess Scott Skiles' coaching is good for something.*

*Scott Skiles' coaching is, in fact, not good for anything. Scott Skiles is an abomination of coaching, the NBA, mankind, and sentient beings in general.

- I feel for the guy, but I've gotta single out Duhon a little more. He's either a big-time perfectionist or, well, a big-time pansy. The guy just won't take an open shot. Nor will he challenge anyone at the basket. I love the idea of a "pass-first" point guard, but if Du never makes a play at the rim, defenders stay on their feet and it becomes very difficult for him to throw assists. Tonight's five turnovers for Duhon (and another 5 for Lee on the receiving end) exemplify that issue. Chris had his first points in the third, which just doesn't cut it.

- Tim Thomas didn't play the second half because of an upset stomach. I nearly didn't either, for the very same reason.

- Kenny Albert, son of Marv, called this one for the Knicks. He's got a nice baritone like his father's, but, given tonight's results, I hope he never, ever picks up a Knicks Gamenight microphone ever again.

- Another lovely Kenny Albert moment was when, after an MSG apparel pitch, he asked Walt Frazier, "Clyde, have you purchased your Knicks hoodie yet?", to which Clyde condescendingly chortled, "Not yet". The day they make hoodies out of 100% alpaca is the day when Walt Frazier wears a hoodie. Until then, not a chance.

- I've been home for a couple days, which means my dog gets to watch games with me again. She came in around the third quarter, looked at the screen, looked at me, coughed, and left the room.

- Jerome James made a long appearance in garbage time, and made it clear that he could have actually been useful in this one. A nice alternative to the failing pick-and-roll would be to simply post up a big man, but, of course, D'Antoni didn't have anyone even remotely big enough to post up Andrew Bogut. Except for Snacks. I'm only half-kidding.

- D-Lee looks a little sunburnt. Looks like somebody stayed an extra day in Los Angeles, eh?

Jokes aside, tonight sucked a whole lot. It was easy to call, if you've been around here long. Just when the Knicks show that sign that they're turning the corner, they put in a sloppy, careless effort and drop one they should've won. Hopefully, it's just that the Bucks have our number, and after the upcoming setback in Boston, the Knicks will be back on their way to .500. Hopefully.

I'll be travelling out west tomorrow, and will very likely be needing help on recaps for the week ahead. I'll get a post up formally begging for your assistance, but please do consider it in the meantime. Peace.