Share All sharing options for: How David Lee Can Help Chris Duhon

I've been complaining a lot recently about Chris Duhon's inability to hit cutters on the pick-and-roll. When Du gets into the key, it seems like he's compelled to either kick out to a three-point shooter or try and cram a low pass through several defenders. This does two things. One, is it creates a number of unncessary turnovers. Think of the Milwaukee game. How many times did you see Duhon pass into the paint, only to have it deflected or picked off and pushed the other way? This also bumps the volume of three-point attempts in a game. There will be streaks when repeated catch-and-shoot threes are working to perfection, but more often you'll have Harrington, Thomas, and Richardson heaving up 7 or 8 long-bombs a game without a moment's hesitation.

Why is this happening? Well, I think teams realized something following after his 22 assist effort against Golden State and hot streak in early December. Du's man is very often screened by David Lee, who then bull-rushes to the basket looking for a pass. That works against the Warriors, but not against other teams, who have adapted by simply crowding the paint and forcing Duhon to either thread the needle or look elsewhere. Here's where Lee can help matters. Check out Lee's shooting from different spots on the floor this season (screenshotted from NBA.com's "Hotspots"): 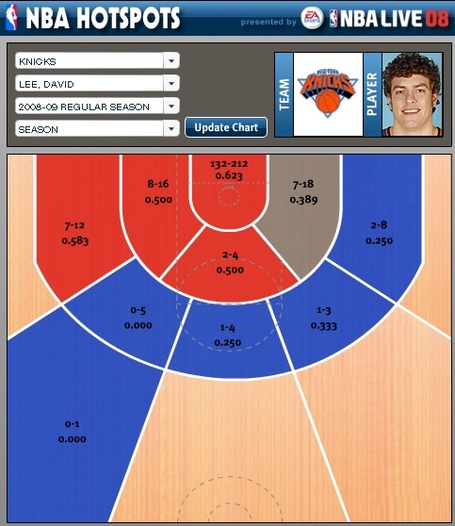 D-Lee's a champ around the basket. We know this. That's why Kenny Smith calls him "Shallow Water". Lee's been quietly working on his mid-range game, though, and it's been intermittently effective throughout the season. Look at Dave's numbers on the left side of the floor a few feet from the basket. You know what that red means? Kid is HOT from that range. Granted, Lee hasn't left his sub-basket office much this year, but the numbers look great.

Remember the Lenny Wilkens years? (Don't remember too hard. You may trigger a seizure.) His Knicks had perhaps one "play", and it was simple. Kurt Thomas would set a pick for Stephon Marbury, then pop out to one side of the basket, catch a pass, and can a 15-foot jumper in flow. It was a simple but effective play, and was good for about 10 points every night.

Now, Lee's shown us that he can hit that very same shot with some consistency, so how about this? Instead of making a bee-line for the rim, set the pick and then slide over to the left side of the floor. It gives Du more room to operate and cuts down the paint population significantly. Chris can hit Lee with a crisp pass, find somebody cutting baseline, or utilize his speed and craftiness to attack the rim. Now, the onus is still on Duhon to make the right pass and take the shot when appropriate, but I think this small change to the Knicks' pick-and-roll is a more efficient alternative to the current model. If Lee can get comfortable from medium range, it'll help cut down on turnovers and open up possibilities for New York's halfcourt offense.

Sidenote: It's really hard to perform a successful Youtube search for "david lee jumper" when that clown David Lee Roth and his stupid band have a song called "Jump".