Share All sharing options for: Game Thread: Knicks vs. Timberwolves- 12/26/08 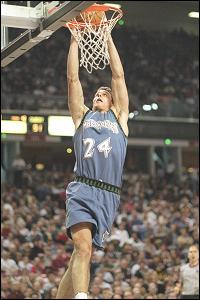 Hope everyone had a good holiday, and I hope the Knicks got their rest. Tonight's game is against Minnesota, one of the worst teams in the NBA. If the Knicks have any shot at overcoming their recent losing streak, it should start tonight with a win. Al Jefferson and Mike Miller are both capable of giving the Knick defense problems, but if the offense is working with reasonable success, New York should be able to grab this one.

Once again, I'm out of MSG territory, so if anybody's watching and would like to recap, that'd be fantastic. Check out the brilliantly-named Canis Hoopus for Minny coverage of tonight's contest.