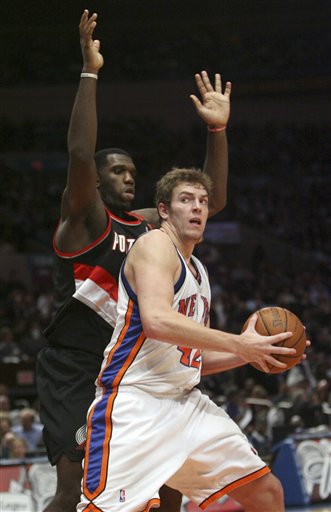 Well, you can't fault them for lack of effort. The tired, weary Knicks- only seven of them getting significant minutes- gutted through a close game, but ultimately gave way to a better team in the Blazers. The Blazers had been off all night, but Brandon Roy and the Portland second unit took over late to stifle the worn-down Knicks. Some notes:

- Al Trautwig's pre-game talk started with some choice words: "I would rather stick this pen in my eye than give you another Stephon Marbury update". I feel that.

- MSG's "Mic Check" segment gives us a look at Mike D'Antoni's pre-game speech, and it's basic instruction and motivation regarding defense, teamwork, and whatnot. More than anything, though, it makes me wonder what it would've looked and sounded like when Isiah was coach..."Guys, I was watching Entourage On Demand last night, and I just don't know if Amanda is going to work out as Vince's agent. Anyway, Blazers tonight. Try not to sweat on me a lot. Let's do this."

- Wilson Chandler started the game guarding Brandon Roy, and did pretty nicely staying in front of him.

- The Knicks as a team, in fact, did a decent job stifling Portland's big guns early on. Greg Oden was bricking dunks (to be fair, not the Knicks' doing), and LaMarcus Aldridge got into early foul trouble. On the other end, New York started slowly, but got rolling from outside and attacked the basket as well to build a 14-point run and a 7-point lead at the end of one quarter. Chris Duhon and Tim Thomas in particular made a concerted effort to get into the paint and draw fouls.

- In the second quarter, Duhon sat down and Anthony Roberson stepped in at point. Things ground to a halt, with guys like Thomas and Harrington trying to create their own shots and the Knick lead withering. We soon saw Duhon grumpily unwrapping the mummy tape from his sore back to re-join the action and get the offense rolling again.

- Brandon Roy started to play his game in the second, and when matched up with Quentin Richardson, had his way from the mid-range. Roy's ability to score at will got the Blazers close by halftime, and put the game out of reach in the fourth.

- Upon hearing that Jill Martin would be interviewing MCA at halftime, Mike Breen asked Walt Frazier if he'd heard of the Beastie Boys, to which Clyde replied "the Beastie Boys...yeah they're hot".

- Speaking of the halftime interview, Rev Run popped in to interrupt Martin's "minute" with MCA, and the two campaigned hard for a one-on-one halftime matchup, but didn't get it, alas. That would've been entertaining. The Reverend doesn't look like he could hang.

- Here's a fun stat...Last year the Knicks had 1- ONE- double-digit assist game from any player (Nate Robinson had 10 in a game last January). With tonight's 13 dimes, Chris Duhon already has 5.

- If the Knicks had beaten the Blazers, I would've pointed out two keys. One is that they coaxed Portland into playing their pace. The Blazers shot 44% from the field and jacked up 26 threes on the night. Granted, they were getting open looks, especially when D'Antoni attempted a zone D for a second, and shot a decent percentage (42.3% from three). The other way our guys got an advantage was by completely ignorning Greg Oden when he was more than an arm's length from the basket. Why they couldn't do this with Joel Przybilla, I don't know.

- MSG showed a shot of a guy and his girl in the crowd, with the girl sound asleep on his shoulder. They're at an NBA basketball game! The excitement, the noise...that girl was roofied.

- By the fourth quarter, the deeper and more talented team shone through. Roy and the Spaniards (Spandem?) had their way, and Nate McMIllan went with the reliable Przybilla over Oden to bury the Knicks. Meanwhile, Duhon was desperately trying to keep the guys afloat, but got little to no help from his teammates, who were firmly planted around the three-point arc. It looked like a winnable game, but these things will happen when you're playing 8 guys and don't have a backup point guard or anybody over 6'10''.

- Cheers to David Lee (19 and 12) and Chris Duhon (23 and 13) for excellent encores to their career performances on Saturday night. Both those two get the crap beaten out of them every night, and Duhon in particular has been a warrior. He repeatedly got to the rim out of sheer will, and missed out on some foul calls late in the game. We may need to pay him more respect pretty soon. Keep it up, Dave and Chris.

- It's nice to have a real coach. It really, really is. I forgot what it was like for my team to come out of a timeout and run a successful play going to the basket.

- This is my biggest question of the night. Quentin Richardson got whacked in the face, and nearly looked like he was going to have to come out, leaving Nate McMillan to pick someone off the bench to come in and take the free throws. If you're not familiar, that's the case. When a player is too injured to shoot his own free throws, the opposing team gets to pick someone off the bench to come in and take the shots. Here's my question. What if this had happened during one of the games that Stephon Marbury was suited up, but didn't play, perhaps because he'd refused to do so? The other team would definitely pick him, right? Would that visit to the line not be the tensest, most awkward two free throws ever taken in an NBA game? How would D'Antoni react? How would Steph react? What would happen after the free throws were taken? This has officially moved into the number one slot on my "things I would do if I had a time machine" list. Saving the dinosaurs can wait.

That's all for now, folks. With Nate Robinson and Jared Jeffries on their way back, we'll be at relatively playable strength by the weekend. In the meantime, the Knicks head to Cleveland tomorrow night, for what may be one of the uglier games of the year. Tonight, though, was a gritty and fairly impressive performance, but the under-manned Knicks just couldn't hang with a far superior team.