Share All sharing options for: Game Thread: Knicks at Cavaliers- 12/3/08 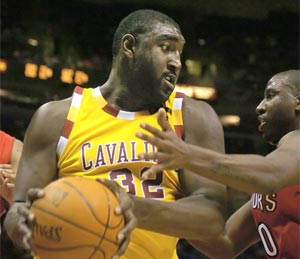 Coming off a hard-fought but losing effort against Portland, the cruel basketball gods have shipped the Knicks to Cleveland this evening. New York's still likely to be only 7 or 8 deep, with Chris Duhon once again shouldering the entire point guard load and David Lee taking on the entire Cleveland frontcourt. The Cavs have already invaded New York and pistol-whipped the Knicks, and it'll take quite a coup to topple their undefeated home record tonight. But hey, anything can happen, right? Tipoff's at 7:00. This here's your thread for in-game comments and such. Pile on them comments, kids.

Check out Fear the Sword for the Cleveland spin on tonight's matchup.