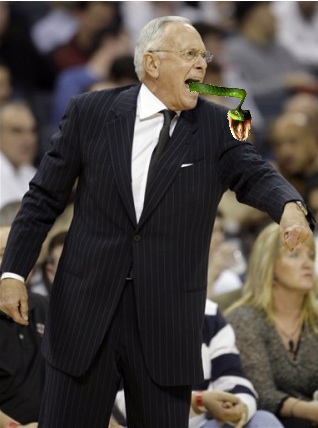 I don't have much to say about last night's Knicks-Bobcats match-up. I watched the whole thing, but it was hardly an interesting game. New York got by with juuuust enough defense against the league's worst offensive squad and a solid game from Wilson Chandler (19 points on 7-15 shooting), together with some timely free throws by Chris Duhon and Nate Robinson, was sufficient to eke out a victory. Some measure of revenge was once again acheived against the face-eating demon-coach's new team. Also:

- Jared Jeffries deserves some recognition for being generally disruptive on both ends. He had three blocks and three steals on defense, which is excellent, and had three turnovers and a number of wild attempts on offense, which is just what we expect. Great.

- Barnesgasm mentioned this, and I agree-- I don't think I've ever seen a game with so many overshot layup attempts. Nearly everybody had at least one occasion to drunkenly slap a chip shot off the back rim. On one drive, it actually seemed like Chandler was trying to penetrate the backboard with the ball. It was more than a little confusing.

- To make up for it, Chandler dunked in and around Emeka Okafor's mouth in the first half. This brought two things to mind: First, Emeka Okafor must be this era's Shawn Bradley. Like, seriously. It's probably just a result of his being one of the few big men left in the league with enough sack to challenge shots, but it's still pretty funny. Second, I think there should be a Dunk Reaction contest, and I think Nate Robinson would win it. When there's a ferocious dunk, all teams do the "everybody pretends to be trying to run onto the court while one or two guys hold them back", but Nate takes it to another level. On this particular jam, he stood up, grabbed his head, and pretended to faint Baptist minister-style, with Malik Rose catching him from falling to the ground. I think Nate would have that contest locked up, with maybe only a slight challenge from Channing Frye's karate.

- I love Ryan Hollins. More than anything. I'd love to see him join the Knicks. He's a big, shot-blocking center, you know, so that's cool. There's more, though. He's unbelievably and delightfully demented. I enjoyed two years ago when he registered 3 fouls and a goaltending violation in one minute, and in this one he didn't disappoint. While flailing at a rebound, he managed to crack his own teammate, Gerald Wallace (perhaps the most concussion-prone player in basketball), on the head with a stray fist. Like, to the point where Wallace collapsed to the ground in pain. Anyway, Ryan Hollins in the Knicks is a must. Come for the shot-blocking, stay for the potential to have teammates maimed.

Why, you ask, am I recapping a relatively meaningless basketball game at 6 a.m.? Well, I've been up since 4:00 tending to a brand new labrador puppy that alternates between being almost impossibly adorable and driving me to want to make little black mittens out of it. We just got over an hour or two of the latter. So, to the tiny dog that just spent 40 minutes barking at my foot...this recap's for you. Asshole.