Share All sharing options for: Game Thread: Knicks vs. Pistons- 12/7/08 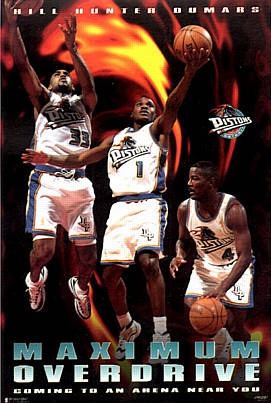 Good morning, friends. The Knicks make a brief return to the Garden this afternoon to face the difficult Detroit Pistons. Deeeeetroit's 11-7, but oddly enough, is 0-4 so far this season in Sunday games. Possible reasons include God spiting Joe Dumars for his formation of a satanic cult, Rip Hamilton and Rasheed Wallace's habit of playing Spyro 2: Ripto's Rage! until dawn every Saturday night, or Tayshaun Prince's concern over whether or not there will be boobs in that night's episode of True Blood. I'm going with all three.

I haven't ready anywhere whether or not Nate Robinson will be ready to go again this afternoon, but I would assume that Jared Jeffries is back for good. We could really use Nate, as Duhon is clearly wearing down and Roberson's point guard play makes me think my TV froze.

This here's your spot for comments throughout the afternoon. If anybody's down to write a recap, that'd be much appreciated. I'm gonna catch as much of the game as I can, but some papers due tomorrow are beckoning pretty hard.