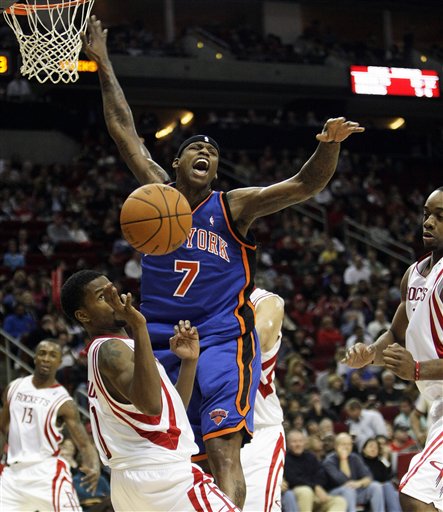 I guess if it's not one thing it's another, eh? The Knick defense was pretty solid, at least through 2 quarters, but Mike D'Antoni's offense crashed and burned like we've never seen before. In the first half, David Lee and Jared Jeffries did a pretty solid job closing off Yao Ming to make up for sputtering offense. After the break, though, both O and D hit rock bottom en route to a 14-point quarter, and the Knicks never looked back from a blowout loss. This one got so ugly that it warranted a visit from Francis, so we'll keep the notes short:

- It is worth mentioning that for the first quarter and a half or so, Lee and Jeffries did fantastic work on Yao. Lee got the initial matchup, but as soon as the big guy was on the ball-side of the court, Dave would front and Jeffries would step in to help sandwich him. Especially when outside shots weren't falling, it was a very effective strategy.

- In 1997, Al Harrington sang a duet with Rosie O'Donnell on her TV show. If you find video of this, I will give you the keys to the blog (didn't know I kept my laptop in safe, did you?)

- Charlie Ward coaches high school football in the Houston area, and was in attendance. In an interview with Tina Cervasio, he described the peculiar phenomenon of having his young players look him up online. He referred to the search website they use as "Wakedia", which leads me to believe that Charlie Ward isn't much of a web junkie.

- Don Chaney is a Rockets radio personality! Do you have any idea how shocking it is to see Don Chaney on TV when you're not expecting it? I imagine my Howard Eisley flashbacks are similar to Vietnam flashbacks, only bloodier.

- Nate Robinson is still ice cold from outside. He missed four more threes, putting his running total at 4 of his last 34. In garbage time, though, he managed to get closer to the hole and score a couple times, so his line (6-13) wasn't that bad. Joining Nate in the slump department are Al Harrington, Wilson Chandler, and Quentin Richardson, who have all seem to lost the touch. You know high school field hockey teams fall into synchronous menstrual cycles? I'm just saying...

- One good thing about Nate: I think I've neglected to mention that Nate is one of the best one-on-one fast break defenders I've ever seen. It's gotta be that cornerback pedigree. When you're taking the ball to the hole, he times his jump perfectly to either block the shot or get a solid foul on you. And they don't call pass interference in basketball, so he's in great shape.

- David Lee canned a few jumpers early, but couldn't find his shot outside the paint later on. Still, 14 points and 11 boards while facing one of the tallest humans on earth isn't bad at all.

- Brent Barry has long been one of the more intriguing players in the league. He's got all the qualities of the typical white three-point gunner, but with this bizarre character wrinkle. He loves behind-the-back passes. Loves them. And he'll throw them even when it's completely inappropriate to do so, as in his particularly egregious attempt in the second quarter last night. Add in his silly Dunk Contest win, and there's more to Brent Barry than meets the eye.

- Anyway, it was that second half that did the Knicks in. D'Antoni started Harrington for the third quarter in an attempt to kick-start the offense, and did not get results. The Knick scored ONE point on zero field goals through 6 minutes, and would've had only 9 for the quarter if it weren't for two last-second jumpers by Nate and Du. Houston also couldn't score for a while, but guys like Von Wafer and Aaron Brooks (by the way, Nate Robinson ÷ Calvin Cooldige= Aaron Brooks) got going from outside, while Yao and friends had their way down low. New York was quickly on its way to a blowout, and I made a quick decision to switch channels.

That is all. Enjoy your Sunday and don't let your dads eat pie.