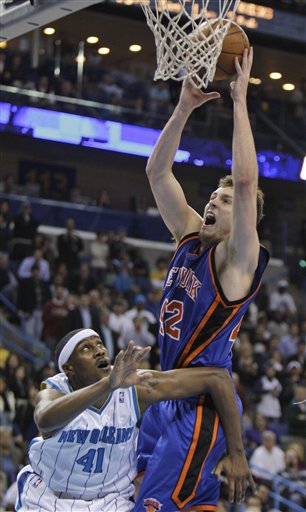 Your 2009 New York Knicks, folks. In what has become typical of this season, the Knicks ignored expectations (not mine), defeating the Hornets convincingly in New Orleans. The Knicks gave their all on defense and were able to scrape together just enough offense to embarass a far superior team. Some notes:

-I mentioned Chris Duhon's community outreach in the New Orleans area earlier, and we were further informed by Mike Breen that Du provided tickets for 250 youngsters from the Ninth Ward to tonight's game. That's a LOT of tickets. 30 friends and family members, too. Damn.

- Chris Paul got the Rondo treatment tonight, and it paid off early. Jeffries and Chandler took most of the assignment against the littlle dude, and played a few steps off him. Left pretty much alone, CP3 was content to pass up outside looks, allowing double teams and crowded passing lanes down low. Later on, Paul took the burden on himself to get some scoring done. Had he done that the whole way, we could've been looking at a 40-point performance.

- The Hornets have quite a few big men, and on a night when their outside shots weren't falling (a frequent key to Knick victories), offensive rebounding and easy looks around the rim kept them in it. David West and Tyson Chandler were all over the glass, and could score pretty easily over the diminutive Knicks if they got the ball in the paint.

- Tim Thomas was supposed to miss this one with a touch of the flu, but instead came in and provided a big boost- 9 quick points- off the bench.

- Tonight's big number: 30 assists to only 8 turnovers. That's unbelievable from this team. Credit goes first to Duhon, who registered 9 dimes to only 2 giveaways in his home state. Further props, though, to Quentin Richardson and Jared Jeffries (!) who had 8 and 6 surprising assists apiece. Both did a marvelous job of driving and finding cutters. It was uncanny and wholly unexpected.

- MSG focused quite a bit on two Knick fans from Tulane who sat behind the bench and dropped the old high school "OHHHHH" chant on Hornet free-throw shooters.

- Walt Frazier, describing what most thought the Knicks' chances were in this game: "This is a night when doom and gloom loomed". Vintage Clyde.

- He didn't play, but in seeing him on the bench, I was reminded of my belief that Devin Brown looks quite a bit like Christina Milian. Anybody?

- Richardson, Harrington, and Robinson each continued their shooting slumps, but there are few things worth mentioning. First, Al and Q managed to make themselves useful despite bad shooting. Q shot only 7 times, and instead took on a quasi-point guard role with the aforementioned 8 assists. Many of those were gorgeous handoffs to David Lee under the basket that I don't think a single other Knick could accomplish. Meanwhile, Harrington didn't exactly cease fire (6-19), but made his presence felt on defense and grabbed 10 boards. Nate, meanwhile, was still shooting out of rhythm and didn't lend much help on defense or by passing the ball. Breen made a good point that the kid's got plenty to offer besides scoring, and his best bet during this slump is to concentrate on those other things. Oddly enough, all three of these slumpers hit huuuge threes in the fourth quarter.

- Besides those three bombs, credit is due to Wilson Chandler for abusing James Posey on a couple possessions to keep the Knicks afloat. It's been awhile since the Knicks executed this well down the stretch, and Wil was big contributor. 19 points on the game for the young'un.

- I should elaborate on Jared Jeffries' game. First of all, he shot 1-8, which is dreadful. He simply shouldn't be taking that many shots, particularly from the ranges he took them from. On the flip side, Jared was fantastic in all other regards. Seriously. He dished out 6 assists and grabbed 9 boards, several of which were back-breaking offensive bounds. He also did a solid job bothering Chris Paul and doubling off him when he felt the need.

- Paul started to score some in the second half, and Breen mentioned that he "really knows when to turn it on". I'm not sure I get that. Why not just "turn it on" at tip-off? The Knicks were putting slow-footed forwards on him and daring him to shoot. Paul's generally capable of hitting an open shot and can easily beat a bigger guy off the dribble, so why not attack? More than anything, it just seemed like he was coasting in the first half. I love Chris Paul and am more than happy to accept a mailed-in half against the Knicks, but what's the deal?

- David Lee's jumper may have arrived. The demi-god dropped 24 (12-16), including a few mid-rangers that tickled the twine and the hair on the back of my neck.

And that is all. It was an exciting win, and might give the Knicks a little buzz heading into a home-and-home with Washington. But probably not. If this recap seems a little rushed, that's because I rushed it. I've got some bizarre and unrelated news to get to before I retire for the night.