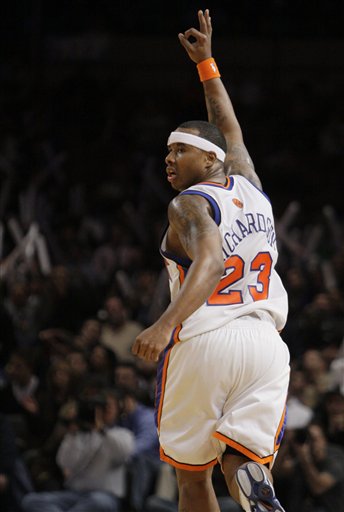 Now, that was some D'Antoniball. By both teams. Washington shot 60% from the field, 10-14 from downtown, 87% at the line, turned the ball over just 13 times, and scored 122 points. And they lost. The Knicks' shooting numbers weren't quite as good, but the Js were still falling and more free throw attempts and rebounds helped New York secure a victory. Some notes:

- This may be the best shooting game I've ever seen at any level. The two teams shot a combined 57% from the field, 60% from downtown, and 87% from the line. The MSG producers said that was the first time two teams had gone 50, 50, 85 in a game this year, and I believe it. I can't remember a game in which I was this surprised by either team missing a jump shot.

- Part of the great shooting was two renaissances by slumping Knicks. Quentin Richardson awoke from weeks of spotty marksmanship for 26 points, including 6 of 7 threes. Al Harrington came alive as well, putting in an efficient 27 of his own (8-12) in only 28 minutes.

- Meanwhile, all the Wizzle starters shot well, but it was Nick Young that truly found the touch. "Monumental Air" hit shots from damn near every square inch of the floor, going 13-17 for a career-high 33 points. It was special, too, in that he created nearly all of his shots. The kid simply catches the ball, dribbles around a little for appearances, and then lets it go from wherever the hell he pleases. I honestly wouldn't be surprised to see Young pull up from halfcourt and swish it through. That said, Wiz fans complain that he's completely one-dimensional, and 2 rebounds, 0 assists, 0 steals, and 0 blocks do little to dispel that notion. 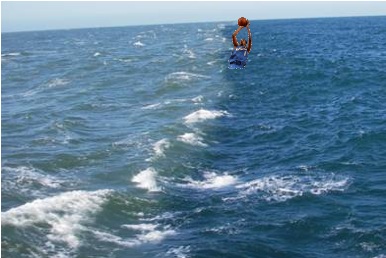 - Convince Ryan Reynolds to have sex with an obese black woman. Now take the child and raise him (it should be a boy) for 55 years with a maximum of 4 hours of sleep every night. Done? Congratulations, you're now the proud owner of an Ed Tapscott.

- Against his former team, Jared Jeffries was excellent. He shot 2-3 (and no shots from outside!), scored 8 points, grabbed 8 rebounds, and guarded nearly everybody on the floor. This includes point guard Mikes James, though I wouldn't say James got the "Rondo Treatment", since he's a legitimate threat from outside.

- Even though he channeled Steve Francis a little (6 turnovers, one possession in which he dribbled in circles for 15 seconds, then bricked an over-the-shoulder runner), Chris Duhon had himself a nice game and did a fantastic job working the pick-and-roll with David Lee. 17 and 9 for Du.

- Despite a number of solid performances, I"m gonna have to give David Lee my coveted "Man of the Night" award for his 30 point, 10 rebound performance. Lee looked great on the other end of Du's passes and even canned a few mid-range jumpers. He also had a 3-rebound possession that culminated in him getting fouled. If they sold a David Lee-scented candle, I might buy it.

- Oh yeah, and 6 assists. If they sold cookies made from rims that David Lee has dunked on, I would eat them.

- Mike Breen was saying all night that such an shot-friendly game would eventually come down to who could get defensive stops. I guess that must've been the case, but it didn't really seem like it. It felt more like the teams just kept taking and making shots right up until the final buzzer. Maybe even afterwards. I wouldn't be surprised if they're all still out there draining threes.

- In fact, the only period of any effective defense was a 14-0 Knick run in the first quarter that was spearheaded mostly by fast break buckets off steals. The Knick defense is really at its best when guys overplay passing lanes and come up with deflections. There are enough long limbs on this roster to cause a lot of havoc off the ball.

- Alright, here's my thought of the night. With less than a shot clock remaining and the Knicks up 6, the Wiz threw in the towel and opted not to foul. With the clock still running, Mike James came over, pretended to play a little D, and then gave Chris Duhon a hug and a handshake. I'll reiterate that this was all with the ball in Duhon's hands and the clock running. Now, this happens all the time. Ballhandlers probably feel a little weird letting their guards down while the clock is still running, but who's gonna turn down a hug when the opponent appears to have thrown in the towel? Here's my idea: Your team is down 3, maybe 4, with time winding down. Don't wrap the ballhandler up for a foul. Shake your head, walk over, and offer him the common one-arm hug. Surprised but polite, the ballhandler will likely accept the brotherly, sportsmanlike embrace. Now ATTACK. With the ball now gripped by one casual hand, the victim is easier than ever to pickpocket. Steal the ball, race up court, and make it rain. This plan could work once, tops, but I think the element of surprise and instinct towards politeness could make it work.

What were we talking about? Oh yeah. The Knicks won. Hey, we've got a win streak! The Knicks are back in action this Friday against these very same Wizards. My money's on a 75-72 slugfest in which both teams shoot under 40%. For now, though, long live D'Antoniball.