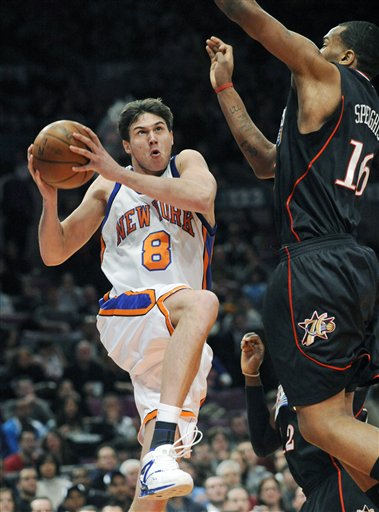 Well, I've got little to talk about other than one particularly exciting development. The Knicks have seriously fallen off in terms of effort and teamwork, and it shows. The Sixers are hot, and they ran the careless Knicks to death throughout the game. The two Andres- Miller and Iguodala- exploded for 27 and 28 apiece, while the Knicks sputtered at the other end. Some notes:

- Really, just one note worth reading: Danilo Gallinari made his triumphant return to the court and showed some flashes. The good news was that in 15 minutes, Danilo was hit two threes for 6 points, got an assist, and had a couple more nice-looking passes that were fumbled on the other end. He also rejected Marreese Speights, would've had a nice finish at the rim if it weren't for a travel call, and had the highest +/- on the team with +7. The bad news was getting embarassed on more than one possession. Iguodala shook him for a huge dunk and Miller threw a gorgeous ball fake to beat him on the fast break. These things happen to rookies, and all in all I was impressed and excited to see Gallinari at long last. Props to D'Antoni for letting Gallo spin, and especially for allowing him some late-game burn as well (even at the expense of Lee, oddly).

- What else? Well, Nate Robinson continued to single-handedly sabotage the Knicks' chances of ever winning a basketball game by shooting 4-10 and throwing some of the most boneheaded passes I've ever seen. I think it's the mohawk. It's cursed. For those of you wondering, Nate is now 6 for his last 47 three-point attempts.

- This guy coaching the Sixers looks like that sketchy "doctor" in the Extenze commercials. You know the one I'm talking about.

- Oh, also, Lee hit his head really hard. On the floor. Hope he's ok, because he immediately committed a blatant offensive foul. May have been some frontal lobe damage there.

- Chris Duhon was quiet in the first half, and sat the second with a sore back. We know he's been playing league-high minutes through pain all season, but I hope this isn't a lingering problem.

- This was actually a blowout. The Sixers just shot 15-27 from the line. I've seen a squad of headless toddlers shoot better than that. One of them had a strained hamstring, too.

- I really remember nothing else about this game. Danilo Gallinari is a beacon in an otherwise bleak near future, and I'm now directing most of the hope and excitement in my body towards any potential of his becoming a successful basketball player. My soul is in Danilo Gallinari's sweet-shooting hands.

That is all. The Knicks play 50-odd more games this year against some other basketball teams. Hopefully, Gallinari plays in those, too.