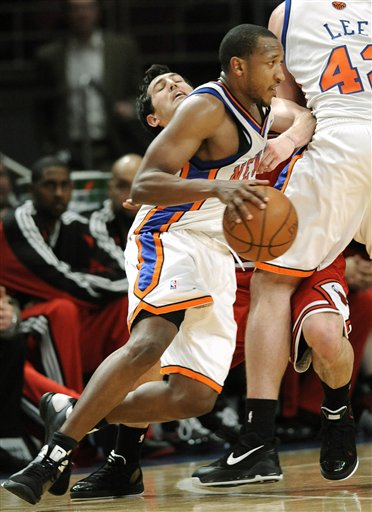 MLK would be proud. Two days removed from an ugly loss in Philadelphia, the Knicks defended their home floor in a matinee matchup with the Chicago Bulls. Quentin Richardson maintained his recent hot shooting and Chris Duhon took over down the stretch (more on that later) to give New York the edge. Notes:

- First of all, thanks everybody for stopping by the game thread. I mean that seriously. I know it devolved into a mess of dick jokes, but it was great to have people show up and comment the game. My favorite part about this site is when the conversation gets going. We're still young and sparsely populated, but I appreciate any and all commenters. Keep it up.

- I had erased this from my memory, but was reminded of the Knicks-Bulls MLK day game in '05, when a young (and still cool) Ben Gordon sunk a fallaway baseline jumper over Mike Sweetney(!) for the win. I was at that game with a friend, and have never been as miserable leaving the Garden.

- In the first quarter, Drew Gooden threw an inbound pass off the back of the glass. I don't think I've seen that one before.

- Danilo Gallinari was once again a real part of the rotation, and was relatively effective once more. Il Cock went 4-7 for 9 points, 4 rebounds, 2 assists, and steals. After a shaky start (despite being matched up with Kirk Hinrich), Danilo showed off his offensive versatility with a three, a midrange J, and a nice driving dunk off a Nate Robinson feed. He also drove and found guys on the wing for open jumpers and used his reach to nab a couple steals when it counted. I am awfully excited for the Danilo Gallinari era, both for his skills on the basketball court and his excellence as a dick joke jumping-off point. 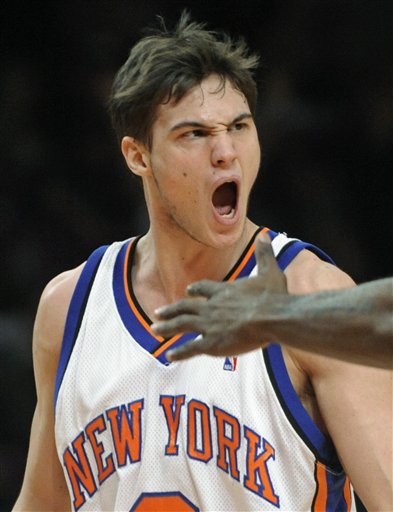 - David Lee had an uncharacteristically inefficient game. He struggled early, and then a mid-game ankle turn bugged him later on. Despite dismal 3-14 shooting, Lee still got himself a double-double.

- An interesting wrinkle in the Knick offense was a balanced passing effort. No Knick, including Duhon, had more than three assists, but everybody seemed to be in on the action. With 18 assists and just 11 turnovers, the ball movement looked pretty solid and made for 9-23 shooting against the best three-point D in the league.

- One of my friends walked in during the second quarter, glanced at the screen, and asked "why is there a girl on the court?". He was talking about Joakim Noah, and wasn't kidding.

- Jared Jeffries posted another quiet and workmanlike 4 and 4, but also played a part in bothering Ben Gordon (3-15) and Andres Nocioni (1-9) into submission. In other news, Jared drew a technical for screaming at a ref and nearly punching him in the face. I don't know what to say. It made me more than a little uncomfortable.

- If the Bulls are gonna play Thabo Sefolosha 5 minutes a game, then they should just trade him to the Knicks. I love that guy. And every team needs a Swiss swingman with cornrows.

- Given Mike Breen's propensity to call Joakim Noah "Yannick", Noah's dad shouldn't be allowed to attend games as he did today.

- Q's shots have started falling again, but I'm especially impressed with his decision to post up when matched with a smaller guard. He's got a sick spin move off the block, and it's great to see him put it to work against the likes of Ben Gordon.

- Nate Robinson looked as if he'd regained a little of his killer instinct, but I still have a couple complaints. One is that he seems intent on closing of Gallinari. That has to stop. Another is that he's having a lot of trouble making quick decisions on fast breaks and drives to the hole. He very consistently attacks the rim, despite having people to pass to. It's like the opposite of Chris Duhon Syndrome.

- Speaking of Du, I tip my hat to the man and kindly take back the Duhon Syndrome comment (I know, I could just delete it, but eh. I've come too far). Du had a solid 19 points on 7-14 shooting, but I'm most impressed with 12 points in the fourth. The Knicks have suffered for lacking a leader down the stretch this year, and Du decided it was time to take matters into his own hands. Despite playing with a sore back, he capped his 34 minutes with a huge drive to the basket and some clutch free throws. I have no problem with Chris calling his own number in crunch time. Somebody has to.

Anyway, it was nice to see Chris Duhon and the Knicks execute down the stretch for perhaps for the first time in a while. Moreover, Game 2 of the Danilo Gallinari experience was a step in the right direction. In short, I'm more excited about this close win over the middling Bulls then I should be. What can I say? I'm not hard to please. The next game is Wednesday against the Suns, and hopefully we can get the same sort of commenter turnout that we did this afternoon. It makes the experience more fun and gives the Knicks some positive vibes. I swear.