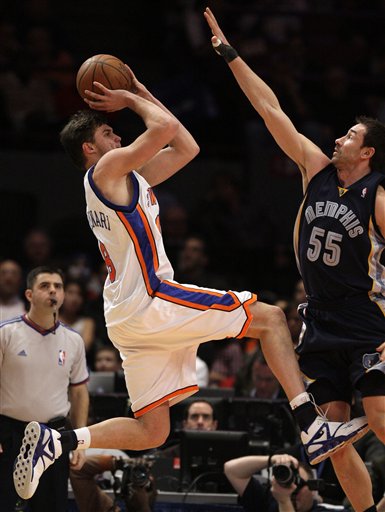 It's the rare occasion that the Knicks win without making us sweat too much these days, so we've gotta savor it. New York notched their third straight win against a discombobulated Grizzlies team. A hot-shooting start gave the Grizz starters a 15-point lead in the first, but New York's bench took over from that point forward, and this thing was a blowout by mid-second half. Some notes:

- The discrepancy between starting five and bench was stark once again, and it's worth mentioning. I think what sets the Knicks apart from other mediocre teams is the bench, and it's apparent with how quickly the second unit erases deficits. With Gay, Mayo, and Gasol, Memphis actually has a potent offensive lineup from tipoff, and last night was no exception. They hit absolutely everything to start, and that early double-digit difference was as much a product of otherwordly shooting as it was lackluster Knick defense. Then, mid-first quarter, the second units came on, and the Memphis lead evaporated before our eyes. The bench edge kept the Knicks afloat all night, and has been a major theme of the season. Check these plus minuses:

It's abundantly clear where the lead came from. It makes sense, since those four have a little more offensive firepower than a lineup that includes Jeffries and Chandler. We can't always count on this squad to clean up any mess that the starters make, but we should keep in mind that the early score isn't always an indicator of the whole game.

- I think Marc Gasol should be called "El Oso". Who's with me?

- Al Harrington in particular provided a fantastic spark off the bench. His offensive output was a bit more varied than we've come to expect, too. D'Antoni repeatedly ran him off screens across the lane, which gave way to easy inside buckets against a Grizz frontcourt that defends screens like they've never seen one before. 16 points on 7-15 is a good day's work from Harrington, and doing better than 1-7 from downtown could even improve on that.

- Clyde described a particularly impressive O.J. Mayo highlight as "spicy mayo". I have nothing more to say.

- Speaking of those two, in discussing Mayo's relatively mundane debut at the Garden (4-14, 10 points), Clyde described a symptom known as "Gardenitis", which is cerain players' tendency to falter at MSG. We'll give Mayo a few more chances before he qualifies for The Itis, but last night wasn't a great start. Also, what's the reverse of Gardenitis? The Miller Effect?

- Chris Duhon chased a loose ball out of bounds and made the legendary (now sorta cliché) leap into the front row. Only Du landed RIGHT ON TOP OF A PREGNANT LADY. Seriously, I think he got kicked by the baby. Also, lady, if you're reading this and aren't pregnant, I'm terribly sorry.

- Hamed Haddadi, y'all! That's it. I just realy wanted to say that.

- Gallinari did a little more on-court exploration and had himself another impressive run. The highlight was a behind-the-legs dribble to a pull-up baseline J (with scissor kick!) over Marko Jaric (pictured above). Other than that, he grabbed a few boards, hit one of his threes, and fouled out in 17 minutes. That last part was actually the highlight of the night, since we got to see a very animated Gallo gesture wildly and disapprovingly on the bench following his sixth foul while the entire bench lost its collective shit laughing at him. 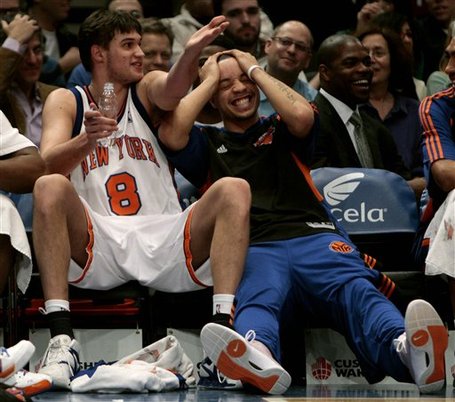 And that'll be all. The Knicks have won three straight, but are back to work at 7 p.m. this evening against a Philadelphia team that's got their number this season. Can they overcome and make it 4 in a row? Check in later to find out.