Share All sharing options for: Game Thread: Knicks at Sixers- 1/24/09 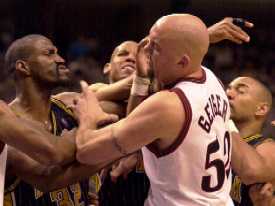 Hello, all. Following their win against the Grizzlies last night, the Knicks make a quick visit to Philadelphia to face the Sixers. Philly's handled the Knicks pretty easily this season, but maybe the Knick's current head of steam can encourage them to keep the win streak alive. The bad news is that Danilo Gallinari won't play tonight, as the Knicks training staff have opted to rest him in the business end of back-to-backs. That may be the kiss of death against a team that's held the Knicks under 100 points in both their meetings, but it remains to be seen. Meanwhile, Elton Brand hopes to make his return to action for Philly tonight, and word is that he'll get some burn off the bench. Who knows how that'll go. Tipoff's at 7, because impatient Philadelphians just can't wait until 7:30 when I've fully digested my dinner. Stick around for comments, and make sure to stop by Liberty Ballers for a Sixerific take on tonight's game.