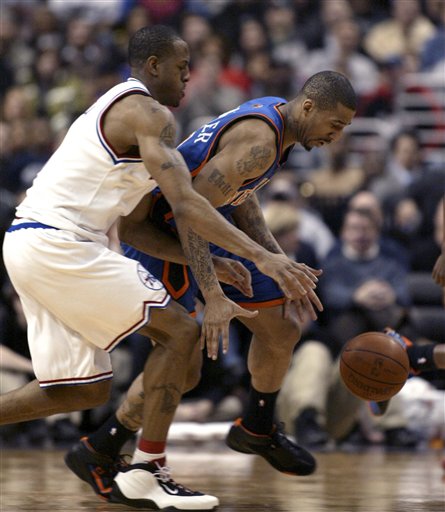 At least we only have to do this once more. The worn-out Knicks faltered down the stretch last night and gave in for the third time to a 76ers team that, while completely uninteresting, really has the Knicks' number. For the second night in a row, New York fell way behind very early and faced a 15-point deficit in the first quarter. In the late first and second, however, hot shooting kept the Knicks alive and actually garnered them a small lead at halftime. It stayed relatively close the rest of the way, but the Knicks were too sloppy and too foul prone to manage their fourth straight victory. A few notes:

- Last night would've gone the way of a blowout very quickly if it hadn't been for lights-out shooting by the Knick guards. Duhon and Robinson really had it going from downtown. Du, in particular, was on attack with all four of his threes coming in the first. In fact, Du had 17 points and no assists at halftime- an odd line for him but a testament to his aggressive play. Second half: 1 point, 5 assists.

- Some of the fourth quarter issues can probably be attributed to Danilo Gallinari sitting out the second game of a back-to-back. Gallo wasn't there to soak up some minutes and keep guys fresh for the late-game push. I wonder if they'll keep doing that.

- Best story of the night: Anybody remember seeing Nate Robinson go to the free throw line on Friday night and salute the crowd? Turns out he'd been playing Call of Duty online and was telling people that he plays for the Knicks. When this was met with disbelief, he vowed to give a salute at the free throw line in his next game to prove his identity to everybody. Sure enough, any COD players watching the Knicks face the Grizzlies got a salute from their teammate. Somehow, that story is all you need to understand Nate Robinson's persona. 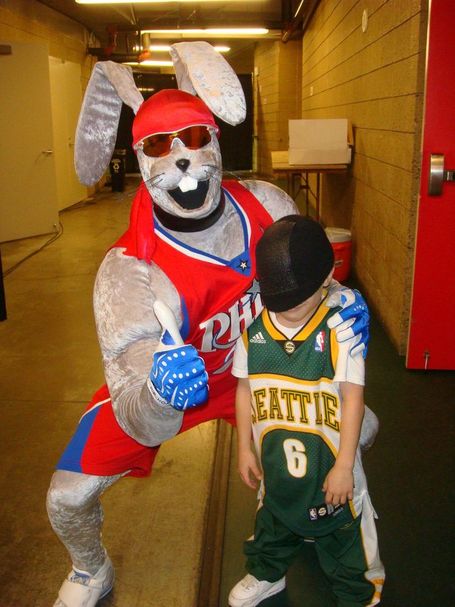 - Wilson Chandler didn't start the second half, probably for a couple reasons. One is that, after consecutive cold first halves, D'Antoni felt the need to add some offensive firepower. Another is that Chandler reportedly has a bruised hip, which might explain his limited output in the past week or so. Either way, the change didn't work so hot and the Knicks scored only 15 in the third quarter.

- Nate Robinson's finally returning to his old self. He went 10-20 with 4 threes, and finished with 26 points and 6 assists. His inability to lead a fast break continues to baffle, though. He even decided to lay in a wide open basket instead of dunking it. The Knick bench was up in arms, and so was I. I can't live in a world in which Nate Robinson shoots layups. ENTERTAIN US, LITTLE MAN.

- The two Andres, who manage to irritate me as much as any players in the NBA, torched the Knicks for like the 30th time this year. It makes me feel better that Iguodala talks like Daffy Duck,  but I'm still so tired of the Sixers. I'd rather the Knicks play like, I dunno...the NETS at this point. Yeah, I said it.

And there you have it. The Knicks will be in action tomorrow against the Rockets. Hope we get as nice of a turnout on that game thread as we did last night. That's all for now, friends. Enjoy your Sunday.