Finally! After countless failed comebacks this season, the Knicks gutted out a come-from-behind win at long last. I missed a big chunk of this, so I'll have to refer to the online scoreboard and the post-game show a little. New York built a lead in the first quarter behind the finely-tuned Duhon-to-Lee pick and roll. In the middle two quarters, shots stopped falling for the Knicks while Tracy McGrady began to heat up. In the fourth, Nate Robinson and Wilson Chandler broke out of their mutual slumps for some huge stops and big-time offensive plays. Some notes:

- Pretty funny that the over-the-top Chinese New Year celebration at MSG is met by a Y. Ming- DNP. Probably lucky for us, too.

- Or maybe we'd prefer Yao. Luis Scola stepped in ably and contributed a Lee-esque 16 and 14 in 28 minutes. The Knicks can usually sneak up on teams because of a superior bench, but the Rockets are pretty deep. Those middle quarters were dominated by fine Houston bench play. If it weren't for that late push by Nate and Wil, New York may have lost the bench points battle.

- Call me selfish, but I'm kinda glad Gallinari didn't do anything too special while I wasn't watching. Gallo had a quiet night, missing two threes but hitting all four of his free throws in 13 minutes.

- The first quarter execution appears to have been spot-on. Lee capitalized on Yao's absence by finishing repeatedly off screen-and-rolls for 11 first quarter points. Nice to see that even with recent success, D-Lee isn't enamored with the jumper.

- I'm watching the post game show now, and they just played all the audio they picked up from the mic that Tim Thomas was wearing during the game. Highlight: Tim tells Brent Barry he's wearing a microphone. Barry comes close and says into the mic, "I wanna say hi to all my peoples in Brooklyn. Wassup. You know how we do." I've mentioned before that Barry (Brizzent to his friends) is more than your typical white gunner, and this only cements my point.

- Wilson Chandler did a fantastic fourth quarter job on Tracy McGrady, who'd been having a pretty solid night. Even so...wow. Mr. Mac couldn't make it happen down the stretch, and airballed a potential game-tying three low and wide. To be fair, Ron Artest didn't help matters with bad decisions down the stretch, but McGrady stood out as chief bed-shitter. 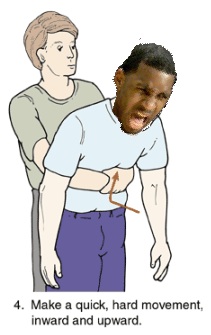 - In case you weren't watching and your ears aren't ringing with this number, this was the Knicks' first win when trailing after three quarters, putting them at 1-21. Now you know why we're so giddy.

- This McDonald's commercial with anthropomorphic food items sitting around a table and cracking stupid jokes is some of the worst marketing I've ever seen. I'm not one of those people that mutes commercials...until now.

- I mentioned his defense, but I'd be a fool not to give Wilson Chandler bountiful props for his offense. I wondered before the game how Wil would respond to being benched, and got a pretty clear response this evening. Chandler stood out, with 18 points on 6-10 shooting. This includes a dagger late-game three and this:

I don't know if you can really see the man's face after he dunked in and around Scola's mouth, but I can report that it was absolutely blank. Wil's post-jam expression might very well have been a post-nap, post-salad, or post-Solaris face. I've never seen a guy look so bored after so viciously desecrating an opposing player and his whole family. Silent Wil FTW, y'all. Thanks to the folks at Real Knicks for their speedy video uploading.

- Don't forget to save some props for Nate Robinson, who appears to have fully recovered from his shooting slump. He went 8-15 from the field, made a number of big shots, and made perhaps the game-winning play by stripping Luis Scola of an offensive rebound with just seconds left (and then parading down the sideline high-fiving John McEnroe and everyone around him).

- Speaking of Nate, I've decided that Robinson is a hybrid of two Rockets. He's got the size and offensive versatility of Aaron Brooks, with the athleticism, mohawk, and oft-irritating showmanship of Von Wafer.

- Gotta feel for our friends at The Dream Shake, where someone's got a case of the Mondays...

That's all for the moment. Enjoy your night and we'll look ahead to a rocky slate of upcoming games tomorrow. Good night.