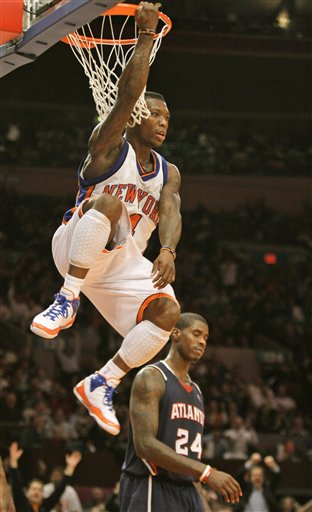 I think Nate Robinson's back. Call it the World at War streak. Ever since he started saluting the crowd, Nate's seemed on top of his game. Anyway, everyone's favorite lilliputian lead the charge in front of a raucous Garden crowd, dropping 20 of his 24 points in the fourth quarter en route to a thrilling Knick win. My notes:

- Disclaimer: we could easily be discussing a loss right now if Atlanta had even come close to competent at the free throw line. Instead, the Hawks shot 17-32 from the stripe and effectively shot themselves in the foot. So, take that for what it's worth.

- It wasn't just shoddy free-throwing that did ATL in, though. It was excellent team offense from a number of Knicks. I will now mention several of them. One gets his own bullet. David Lee had an excellent night from the get-go, finishing with 16 rebounds and 17 points off a number of magnificent finishes. Chris Duhon played the point guard role expertly, dishing out 11 assists, but pressing the D for 16 points of his own when he was needed. Al Harrington dropped 16 and 9, while Jared Jeffries and Wilson Chandler took turns on Joe Johnson (less homoerotic than it sounds) and kept him largely in check. Oh, even Gallo made an appearance, hitting a few J's and committing some token rookie fouls. It was a splendid all-around effort.

- The spotlight, though is reserved for Nate Robinson. Little Nate had twenty fourth quarter points, including two big threes. Best of all, though, was undoubtedly this:

I don't think I've seen him do that before. He's come close to finishing alley-oops, but I'm hard-pressed to remember any that successful. Nate contributed gritty defense and some floor burn in the fourth quarter as well. (Props to Real Knicks, as always.)

- Did you know that you can't dribble with your back to the basket for more than 5 seconds when you're within the free throw line extended? Sort of a college-y rule, but Joe Johnson done broke it tonight.

- Big ATL games for Josh Smith (26 and 12), Marvin Gaye Williams (28 and 7 and a much cooler name than I originally thought) and Flip Murray (20 points, despite apparently suffering from leprosy).

- Speaking of Flip, here's Clyde: "Watch Murray- he's in a hurry!". That bomb dropped twice in the second quarter. The rap game will never be the same.

- What is John Turturro doing in a Heineken commercial? Who wants to think about being groped by The Jesus (or Herbie Stempel, for that matter) while they're enjoying a beer?

- It's weird to see the Knicks lose a second quarter, especially so badly. Their second unit can usually outgun opposing benches to gain a mid-game edge. That's how New York's snuck up on teams the past few weeks. The thing is, as hawksdawgs mentioned, Atlanta doesn't really play much of a second unit. Flip's a legit sixth man, but Mo Evans and Solomon Jones really see only spot minutes. So in the second, we still got a heavy dose of Johnson et al. and not, say, Randolph Morris. (Someone, someday will let Dolph spin and look like a genius for it. It may not be in basketball, but that kid's going places). Anyway, the Hawks posted a 13-0 run during the mid-second quarter and led by 8 at halftime because of sloppy passing and lazy defense on the part of the Knicks.

- I swear Clyde pronounces "Zaza" as "Jar-Jar", but I maybe stretching it.

- Congrats to Wilson Chandler, who earned himself a trip to represent the sophomores next month in Phoenix. MSG interviewed the kid who won the contest to design the Rookie-Soph jerseys. I'm not really into the purple sun-themed look, but he seemed like a cool enough guy and it's sweet that he won the contest. Meanwhile, Pony printed Wil some special Rookie-Soph shoes. It's still weird to me that Chandler's got a shoe deal for some reason.

- New York came out of halftime on the rampage, and registered one of their best third quarters of the season. Chris Duhon reminded us how effective he can be when aggressive, leading a Knick comeback with 11 third quarter points. I swear when Du looks for his inside shot a little bit, it gets tough to stop the Knick offense.

- Funny sequence: Josh Smith handles the ball at the top of the key, throws a gnarly, size-defying crossover at Al Harrington, who buckles and falls to the ground. Sure, Q's ankles got cracked, but I can take consolation in the fact that "J-Smoove" airballed the ensuing jumper low and wide.

- Another key factor in the third was 8 or 9 offensive rebounds by a number of Knicks. We saw all like of putbacks, tip-ins, and kick-outs that helped frustrate the Hawks into submission.

- Yo...the Garden still gets loud. I missed that.

- Those of you who turned this off early missed the highlight of the night. Yes, better than Nate's alley-oop. With time winding down, Acie Law chucked up a meaningless three. No biggie...only, Mike Breen's Broca's Area decided to call him Acie Earl. That's right, we got a satisfying double-digit Knick win and a reference to the seedy, mediocre underworld of mid-90's basketball in one night. I'm in paradise. 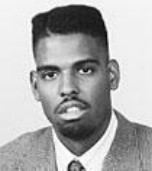 This one's for you, Ace.

- Finally, we all know why the Knicks really won. It was the record game thread turnout that boosted them. Thanks to everyone who stopped by for dick jokes, meta-comments, Flat Stanley references, Amanda Bynes idolatry, and even some game analysis tonight. It makes every game more fun and I encourage everyone who participated to keep participating, and those of you missing out to give it a try. Everybody's intelligent, friendly, and funny, and it's a great time.

And that's your recap, babies. Thanks to all who stopped by for a pump-up-ass win (see what I did there?) at the Garden. With a week battling the NBA Cerberus ahead, let's hope the Knicks can keep this up on Saturday in Indiana.