It's always tough to recap heartbreak and I've got a puppy on my lap that bites my fingers every time I type, so forgive me if this one's a tad short. After being kept at arm's length for three quarters, the Knicks came back to take the lead late in the fourth last night, only to have exploding  the Garden crowd silenced by Jarrett Jack's late-game heroics. The score reached a balance early, and rarely wavered very far. The difference stuck between about 6 and 10 for much of the night, with Indy unable to put it out of reach and the Knicks lacking the firepower to break through. That is, until crunch time, when some improved defense and timely shooting put the Knicks up 5. From then on, the contest became the one thing that both teams dread: a close one. Both teams have struggled down the stretch this year, but only one could lose. And it was the Knicks. Some misadventures under the basket and mishandling of the ball allowed the Pacers to overcome the small lead and take a three-point advantage. Wilson Chandler's magnificent and-one drive to the rim tied it, but a dagger of a jumper by Jack, who'd been lights-out all night, gave Indy the edge and the win with fractions of a second left. A few other notes:

- David Lee played himself a monster game against a very capable frontline (including his doppelganger, Jeff Foster). 26 points on 12-15 shooting alongside 11 rebounds, 3 assists, and 5 steals make me scoff at these rumors.

- And I haven't even mentioned the best part:

That'll be one steal, one guard-like dribbling move, and one dunk from a step inside the free-throw line in your scorecard. Like the nasally psychologist in last year's MSG commercials, I LOVE David Lee. (Tip to TKB again).

- Kelly Tripucka was recovering from food poisoning last night, and came very close to describing its symptoms on-air. Mike Breen saved us from the details, but appeared to have some intimate familiarity with KT's problems.

- Throughout the first half and much of the third, one of the main problems was something we've seen all year: miscommunication on switches. It seems like every time a pick is set, the man guarding the screener (often Lee) "shows" and then freezes at the top of the key, leaving a big man, in this case Foster or Murphy, rolling open to the basket. And you can forget help defense in that scenario. Who's gonna come block a shot- Jared Jeffries?

- Actually, yes. Despite offensive play that would fit the diagnostic criteria for some cognitive disabilities, Jared was downright effective on defense. He had trouble sticking with bigger men one-on-one, but did a nice job turning away slashers at the rim. I don't know that he deserves kudos, so to speak, but how about like half a kudo?

- Kevin James was Jill Martin's "Gimme a Minute" interview, and after his Christmas Day appearance L.A., several dozen Paul Blart: Mall Cop ads, and this interview, I can safely say that Kevin James has overstayed his visit in the spotlight. I wouldnt say I want him to be imprisoned, but is there any other option? 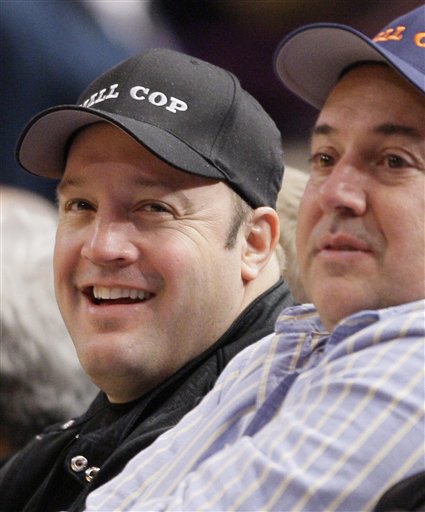 At least his hat doesn't sa-- Oh god, it does. (AP Photo/Julie Jacobson)

- Al Trautwig noted a rather strange occurrence that I still don't understand: Roy Hibbert absolutely dominated the Knick frontline in the first quarter, then hardly saw another minute of playing time. They say it might have something to do with stamina, but sheesh.

- When he feels he's been wrongly accused of a foul, Jeff Foster makes a sound that very closely resembles the cry of a wounded osprey.

- Al Harrington's first half presented more than a couple head-scratchers, but he made up for it by leading the comeback in the third and fourth. Overall 27 points (10-21) and 6 boards is very nice.

- Wilson Chandler's experiencing a recurrence of what can only be described as Stage II Channing Frye Syndrome (CFS). Every time he touches the ball, you can see the gears going. Wil overthinks every pass and shot, and really only seems in rhythm when he drives to the hole. It comes and goes, but once again I'd like to suggest that Chandler quit hesitating, trust his instincts, and play some basketball. Boy needs to get out of his own head.

- Jarrett Jack's one of my favorite NBA players (he's like Stephon Marbury with a mild disposition), and I'd be remiss not to applaud 29 points on 10-14 shooting, including four three-pointers and the game-winner with 0.9 remaining. Asshole. I love that guy. Douchebag.

Well, this one came down to which team would have the last run and overcome their losing ways in close games. Undermanned and a tad sloppy (did I mention 21 turnovers? I guess I didn't), the Knicks just weren't that team. Sitting at 12-19 and going into a difficult Sunday matchup with the Celtics, that sucks quite a bit. Oh well. Enjoy your Saturday.