Share All sharing options for: Game Thread: Knicks vs. Celtics- 1/4/09 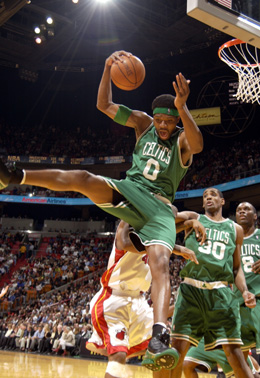 I'm putting this thread up early for two reasons. One is that I've gotta eat an early dinner with family, so I won't be around for the lead-up to and beginning of this evening's Knicks-Celtics game. The second is this: a Knicks-Blazers trade rumor proposed by The Knicks Blog's Tommy Dee. Dee isn't your run-of-the-mill rumor-spewer, so this has me more than a little concerned. The upshot is that the Blazers want David Lee, while the Knicks are looking to move Eddy Curry and get some young guards and/or legitimate centers in return. Possibilities of a three-way are mentioned. I love David Lee and want more than anything for him to stick around, so this all freaks me out quite a bit.

Anyway, this is your thread to discuss the game (tipoff's at 6) and any trade rumors. The deadline's not for over a month, so expect these discussions to heat up in the coming weeks. As for Knicks-Celtics, this may not be far from the truth, but hey, you never know.

Update: Forgot to mention, do check out Celtics Blog for the Boston end of tonight's blog matchup. It still hasn't it hit me that CB is under SB Nation yet.