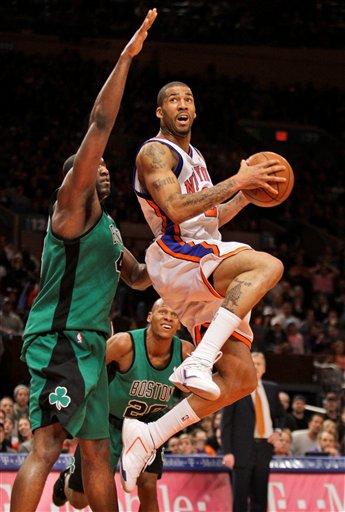 We deserved this. After striking distance from .500 was squandered in sloppy losses to teams like Milwaukee, Minnesota, and Indiana, we Knick fans deserved a feel-good win. This one felt good, indeed, as Wilson Chandler spearheaded a hard-fought effort on both ends. Wil's career-high 31 points and 8 rebounds helped New York overtake the champs at home for the first time in six meetings. Some notes:

- I missed the first half eating dinner with my grandparents, but the Knicks seem to have started pretty well. They lead after the first and were down only three at half. The opening offense came mostly from Al Harrington and Wilson Chandler. The two combined for 31 in the first half, while the rest of the team generally floundered (including an unfathomable 1-12 in the half by Quentin Richardson). It was hard-nosed play by the bigs and pesky ballhawking by the guards that kept New York in it at intermission.

- In the third quarter, Chandler took over. He gave Kevin Garnett as much of a headache as you can give the reigning defensive player of the year. Wil nailed pull-ups, attacked the rim, and drew contact to befuddle Garnett for 15 third-quarter points.

- Even in the fourth, when the shots stopped falling, the Knicks showed some of that long-dormant spark to grab loose balls and play passing lanes. It was a refreshing sight, and it didn't hurt that the Celts' three-point efforts vaguely resembled a romp of otters trying to play Jenga. (I've got a gift for metaphor, I know). 6-25 didn't help their case. 9 of those misses, too, were Ray Allen's 0-9 from three on a night when he was otherwise 7-9.

- Mike D'Antoni rolled the dice by matching either Jared Jeffries or Al Harrington with Rajon Rondo, and it's hard to argue the results. Rondo was only 1-7 from the field, had only 3 assists, and looked off all night. The big guys were clearly instructed to let Rondo shoot, and it worked to perfection. This allowed Jared and Al to back off and either double or clog the lane, providing David Lee with some much-needed help around the basket. Mike D'Antoni: defensive mastermind?

- I mentioned very early on in the season that Nate Robinson added some ear tugs to his free throw routine, and tonight we learned why. See, in Bad Boys 2, (an underrated movie, if you ask me. Seriously.) Martin Lawrence tugs on his ears to calm himself down. And you know the age-old Buddhist maxim, don't you? "Do as Martin Lawrence does in Bad Boys 2, and you shall do no wrong". I recite that every morning.

- In another Knicks/movies revelation, Mike Breen shared that David Lee's favorite actor is Kevin Spacey, his favorite actress is Julia Roberts, and his favorite meal is steak and potatoes. From this I deduced that Dave's ideal date would be Applebee's followed by a K-PAX and Mona Lisa Smile double feature. Oh, and he had 14 and 14, for those of you more interested in basketball than mediocre movies in which Kevin Spacey plays an alien.

- The "Olé, olé, olé, olé" chant playing over the PA system is a little forced. Not a fan.

- Though he literally couldn't hit the broad side of a barn tonight (I actually took him outside for an attempt, and he hit the roof), Quentin Richardson did manage to do what he does best: annoy Paul Pierce. Not that he got under his skin and affected his play or anything. Pierce was awesome. Q did manage to get some subtle hip checks and hushed profanities in though, and for that we thank him. Can't wait for the post-game posturing and spite.

- Maybe because I'm used to watching a team that needs every win it can get, I was a little surprised to see Doc Rivers throw in the towel with 1:30 remaining in the game. The Knicks were up 12 when he sat the Big Three for good, but crazier things have happened. I guess when you're a championship contender, you cut your losses and stay focused on long-term goals. I wouldn't know.

And that is all, good citizens. The Knicks kick off a west coast trip Tuesday with what "should" be a win in Oklahoma City. Until then, I'm happy to bask in the warmth of this most satisfying victory over the despicable Celtics. Great night.