...and not the ones about me cross-dressing. Those are completely without basis. Who are you to judge, anyway? It's my journey.

No, the rumors we're discussing are hard to ignore, and they center primarily around the one guy I wish they didn't: David Lee. From what I can tell, it started with Tommy Dee, who is still all over these rumors that the Blazers seek Lee. Props to TD for the dilligence (at least until we find out that his source is a 14 year-old fantasy owner scheming to make his fourth round pick of Jerryd Bayless pay off because not finishing first in his league has a price: Blood.). Anyway, let me summarize said rumors for you. The Blazers want David Lee. The Knicks want literally any human being with a beating heart, and especially if he can play defense. Possible returns include Travis Outlaw, Jerryd Bayless and/or Sergio Rodriguez, Channing Frye and in a longshot but oft-rumored three-team deal, Marcus Camby. (For what it's worth, Marc Berman  thoroughly bashes the legitimacy and blog roots of these rumors, and then floats a "BLAZERS EYEING CURRY" rumor of his own. Which is more believable. Because the Blazers would obviously want an injury-prone 300-pounder who doesn't rebound to shore up their awful front line of LaMarcus Aldridge and Greg Oden. And it's in all caps.).

To be fair, the most recent news are these reactions from Donnie Walsh, who called the rumors a "fabrication" and shot them down completely. So perhaps these particular rumors can be left alone. Nonetheless, Lee's name just keeps coming up, and unless you believe Mike D'Antoni's explanation ("cause thats who everybody wants"), it seems likely that the Knicks have been on the phones about him. Plus, Walsh is pure business, and he'd probably tell us that the moon landing was a fabrication if he thought it best suited his Knicks dealings (ten points if you can come up with a scenario in which denying the moon landing allows an NBA trade to pass). 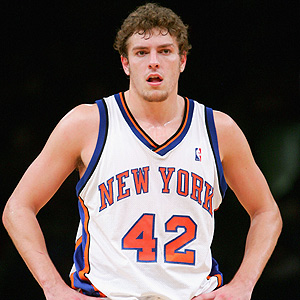 This all terrifies me. I'll admit that I'm a silly, starry-eyed homer, and really believe that Lee means more to this team as a player than as an asset. His skillset, his energy, and his unrelenting loyalty to this team should not be overlooked. Especially that last one. Over the last three years, nearly every Knick has been caught complaining, beefing, or voicing some desire to just give up and move elsewhere. Not Lee. Despite fluctuating minutes, an indefinite starting job, and several roster moves that hindered his development, Lee's kept his head up, his mouth shut, and his play at top level. To me, that's the kind of guy a winning team needs on the court and in the locker room, and I'd give Lee a long-term deal ASAP. I understand that the goals are to make some preposterous big-name signings, but the last few years in Cleveland have shown that you've gotta fill in the cracks to make a star-studded team matter. What better guy than Lee?

Right now, the Knicks need defense, and I get that. It's just that they have more roster room and flexibility than ever before. Why waste it? There's got an open roster spot, Malik Rose's expiring deal, and some Cuttino Mobley-related trade exception (which I still don't understand) to work with. Why not make a mini-deal or raid the D-League? Anything. I'd do anything to keep David Lee on the Knicks. I'm actually so far gone that I'd turn down most trades for superstars to keep Lee on the Knicks. That's how big the P&T basketboner is for Lee.

So, now that you've heard my Lee-loving spiel, I've gotta put it to you guys. Is it time to trade Lee? Am I overrating his worth? (Yes, but how much?) Does he fit the Knicks' long term goals? Speak up in the comments.