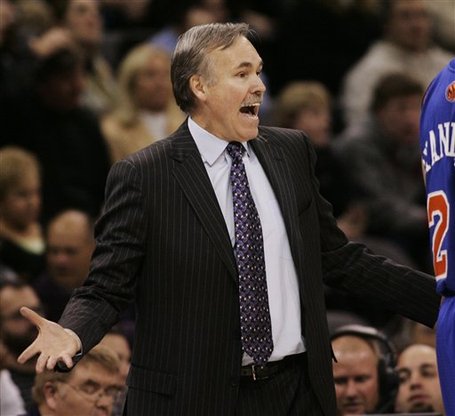 And the massive overreaction begins...now.

Absolutely infuriating. The Knicks made it clear before tonight's matchup with Oklahoma City that this wouldn't be a letdown, that they anticipated a trap and were ready to overcome. Bull. Shit. I've followed the Knicks for nearly 15 years, and I can think of few games that were as absolutely atrocious as this one. The opponent, the circumstances, the effort-- all of these made for an embarassing night to be a Knicks fan. Some notes:

- The Knicks didn't shut down Rajon Rondo on Sunday. Nope, they tricked us. Instead of actually stopping him, they merely captured his tremendous talent and passed it off to Russell Westbrook. The rook got anything he wanted against Chris Duhon, and put up a Rondo-like 22, 9, and 6. Oh, and you thought the Knicks managed to cool off Ray Allen and Kevin Garnett in the last game? Nope. Their skills were handed off to Kevin Durant and Jeff Green, who hit everything from every range for 27 points apiece (and 12 boards for Durant, so I suppose he's KG).

- I guess I forgot to mention why this sucked so much. If you're just looking at the box score, you won't know that the Knicks had a blowout on their hands for much of this game. The deficit was double digits at halftime, and bled into a 23 point hole midway through the third. Against one of the worst teams in history, that's inexcusable. How do I know their one of the worst teams in history? Because in the next several minutes, it took only a passing effort by the Knicks to completely erase the lead and cut it to 2. Seriously. Had they even given a quarter of a shit throughout the game, this would've been a cakewalk. The defense was monumentally awful.

- I was gonna rip into Chris Duhon for taking a steaming dump tonight, but I see now that he had 18 and 6 on relatively decent (6-15) shooting numbers. Now that I think about it, he was the one to can a few big shots and lead that late-game charge. Still, though, if I had a quarter for every time he hit David Lee in the hip with a pass, I could buy a tank of gas! Ha! Am I too late on that one?

- Credit Oklahoma City with being a really surprisingly solid city and arena. They're really loveable underdogs. There's a pre-game prayer (I'd like to see that), they have silly sound effects for each player (I guess the Knicks do to, but somehow this is sillier), and get legitimately rowdy when their team performs. Hats off to the OKC. Still, it would've given me sick pleasure to rob them of a much-deserved win.

- Down 23 in the third, I started typing up a Francis the Vomiting Man post when the unexpected happened: my computer froze. Immediately, I took this to mean that the game was so foul that even Francis wouldn't grace it with his barf. Then, as the Knicks hastily swept away a double-digit deficit, I thought that maybe divine forces had intervened with my vomit post, knowing that the Knicks were going to eke out an improbable victory. Wrong-o. The Knicks suck.

- After a couple games of the same garbage, I'm ready to say it. Quentin Richardson and Nate Robinson are killing us. Killing us. They're the two most trigger-happy long-range shooters on the team, and neither of them has even vaguely resembled a competent basketball player in the last few games. On the other end, where both are notoriously pesky, they've instead chosen to slack off and hack people instead of playing their typical brand of defense. On a team with more than 4 breathing players, Nate and Q would be benched. Hard. We desperately need these guys to get back to being themselves.

- David Lee's really gotta start making up his mind when he gets caught in a pick situation on defense, but props for 14 and 13 when everyone else was struggling.

- Fun stat o'the night: The Knicks are now 0-17 when trailing after three quarters. You can feel it, too. There have been some fun wins, but none where my heart was racing at the end for the right reasons. New York can't finish close games and get shots and stops when they count. Why? There's still no leader. Chris Duhon crawls into his shell, while Nate Robinson is left to do whatever he damn well pleases out there.

- What got into Joe Smith?

- The night had one redeeming moment, and that was a replay of a 1997 incident I only vaguely remember. MSG played footage of an interview with Scott Brooks, dejected and bitter, discussing being cut after the Knicks signed Walt Frazier to a ten-day contract. They even had shots of Clyde in warm-up gear taking layups. The catch? It was an April Fool's Day prank. I think I remember this happening, but I'm not sure. Either way, Brooks' performance was hysterical.

- It's getting eerie now. Somebody with the right access needs to go back and figure out the Knicks' record in games with and without Kelly Tripucka providing the color commentary. I actually really like KT as an announcer, but the man's cursed. Clyde does one game and the Knicks surprise the reigning champions. Tripucka returns, and they get humiliated by the worst team in the NBA. I watched There Will Be Blood for the first time today, and I'm now convinced that the Knicks should hire Klitzy from The Girl Next Door to grab Tripucka by the hands and shriek "GET OUT OF HERE, GHOST! GET OUT!". 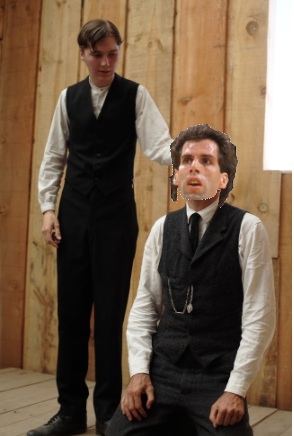 I don't think I've ever written a recap that quickly. This one stirred up a lot of angst in my belly. It was either that or the graham crackers I've been pounding all night. Anyway, Durant, Green, and Westbrook are fabulous young players who I love dearly, but nobody else on Oklahoma City is competent enough for the Thunder to give the Knicks problems, let alone smoke them. Tonight proved that the Knicks are, well, still the Knicks. Wanna know which four other teams the Thunder have beaten? They've defeated the Warriors, Raptors, T-Wolves, and Grizzlies. You know what those are? Bad teams. You know what the Knicks are? I think we may have gotten a hint this evening.