Share All sharing options for: Game Thread: Knicks at Mavericks- 1/8/09 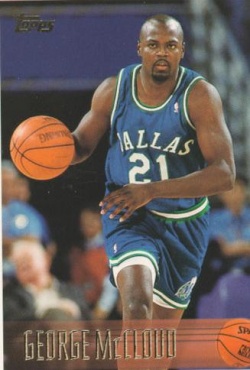 This post is what I believe to be the first-ever game thread typed with one hand. While righty punches keys, lefty is being quietly gnawed upon by a lounging puppy. I multi-task like you wouldn't believe. Anyway. in the spirit of brevity, I'll spare the details and just share the basics. Knicks. Mavs. 8:30. Dallas. Will the Knicks rebound from Tuesday's OKC embarassment? Can Nate, Q. and Wil get it back together? Will Eddy Curry make his season debut? Who matches up with Dirk Nowitzki? Chandler had problems last time. Also, remember that Dallas owes us one. For real.

Bring the comments and don't forget to stop by Mavs Moneyball for the Dallas perspective. Go Knicks.

Note: I really wanted a picture of Tony "Dum-Ass" Dumas, but couldn't find a good one. That joke used to be hilarious to the second grade NBA fanatic contingent of my suburban New Jersey elementary school me.