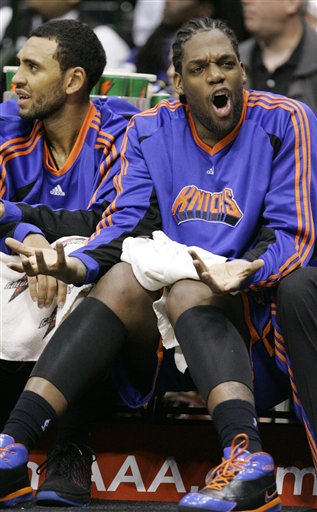 We've seen this one before. The Knicks looked spirited on both ends once more, this time against a superior Dallas Mavericks team. Late-game blunders, though, sealed the Knicks fate in a scenario that's become painfully familiar this season. Some notes:

- New York actually came out great, jumping to an 11-point lead in the first quarter. A couple things contributed to the lead. First, they gave (J)ason Kidd the Rondo treatment, matching him with Jared Jeffries and doubling off of him at will. Initially, Kidd responded the same way Rondo did- by taking and bricking open threes. On the other end, Chris Duhon got off to a preposterously hot start, hitting from every range in what would eventually be a 9-9, 22-point first half performance.

- With about 2:30 left in the quarter, however, Eddy Curry was inserted for the first time this season. It's not that Curry was all that bad. He hit a layup, grabbed a few rebounds, and did his best chugging up and down the court. It's more that, even with an 11-point lead, it was the wrong time to let the big guy spin. The Mavs were playing a lineup featuring 6'8'' James Singleton at center. This rare situation in which the Knicks were overqualified in the size department allowed the Mavs to push the ball and promptly erase the double-digit cushion. That would be all we saw of Curry.

- Wilson Chandler must have the most temperamental jump shot I've ever seen. One jumper swishes smoothly through the net, while the next caroms off the top of the backboard. Every outside pull is an adventure. At this point, I wouldn't be surprised to see Wil follow a make with a brick off the Jumbotron, a fan's head, or the Empire State Building. His shot charts should include both where he released and where the ball landed. Anyway, cruelty aside, Chandler had himself a nice game with 20 points on 8-16 shooting. So much for the SCOWL! factor, though. Turns out the Knicks do lose when Wil's got the offense going.

- I watched Eastern Promises last night, which only exacerbated my unwarranted fear of Phil Weber. For those of you who have seen the movie, if I ever find myself alone with a naked Phil Weber in a public bath, I will be out the door SO fast.

- With 13 and 15 tonight David Lee recorded his 24th double-double this season, surpassing last season's mark of 23.

- Kelly Tripucka (in a loss, cough cough) channeled Clyde by referring to a Chandler-Barea mismatch as Wil having a "mouse in the house".

- Nate Robinson has hit 3 of his last 30 threes. He's taking open shots, too. They're just not falling. And let me tell you, Nate's slump is killing New York on offense. It doesn't look like he'll be able to shoot himself out of this one, so he's gotta make an effort to attack the basket and step up his point guard game. New York simply can't execute down the stretch with one of their main late-game weapons struggling so badly. Something tells me Nate's got a 30 point, 6-6 three-pointer performance coming soon, though.

- Down the stretch that's all it was. The Knicks simply couldn't execute, even on good shots. On the other end, the Mavs (including Jason Kidd, who gets the J back for this one) hit shots when it mattered, grabbed offensive bounds, and got away with repeatedly hacking David Lee to pieces.

- Let me mention again the tremendous first half that Chris Duhon had. 22 points on 9-9 is spectacular, and he did it by viciously attacking whoever the Mavs threw at him. Why he reverted to casual point guard play in the second half, I can't explain. I would've loved that aggression down the stretch.

- If I ever committed a heinous crime and was to be punished in the Clockwork Orange video-torture contraption, Jason Terry's "jet" celebration would probably be the one clip that I found most excruciating.

- Jared Jeffries played exactly the game you want from him. 0-0 for 0 points, a handful of rebounds, and plenty of little defensive plays and tips to keep things going. I don't mind JJ at all as a glue guy. It's when he's a key part of the offense that I start pulling out eyebrow hairs.

- Speaking of Jeffries, if tonight had a silver lining, it was pretty solid defense on Dirk Nowitzki. Dirk's shots weren't falling anyway, but Chandler and Jeffries did a fantastic job doubling and denying him the ball, while Lee was sharper than usual at switching and picking up whoever got spit out of the Mavs' pick-and-rolls.

Again, there was nothing surprising about tonight's loss. It was good to see the Knicks come out with some energy, but we've scene this late-game collapse before. A lot. One of these days, friends, we won't have to put up with this nonsense.