The Knicks started the '09 preseason with a bang, giving the crowd at the Times Union Center in Albany a pretty exciting showing this afternoon. D'Antoniball was in full effect in the victory over the Nets, with the Knicks hoisting 31 threes and connecting on 13. Defense, though, stood out as the deciding factor. While the frontcourt had some trouble with New Jersey's big men and gave the Nets 56(!) free throw attempts, the team as a whole did a superb job forcing turnovers. The second unit, in particular, kicked off the fast break by deflecting passes and picking pockets for 11 steals. 24 forced turnovers helped the Knicks overcome New Jersey's immense edge at the free throw line and emerge victorious.

Other notes and player analysis, after the jump...

- D'Antoni opted to play his veterans as the starting unit. It didn't look great. Al Harrington kept the starters afloat, but the ball movement lacked and nobody seemed willing to attack the basket. On the other end, the undersized "center" David Lee simply couldn't contest Brook Lopez in the paint.

- Later in the first, D'Antoni made wholesale subs and trotted out a lineup of Nate Robinson, Toney Douglas, Wilson Chandler, Danilo Gallinari, and Darko Milicic. Immediately, the defense picked up. Nate and Toney were, just as I hoped, pesky as hell on defense. They trapped well and forced steals to start the attack. Darko, meanwhile, was foul-prone but relatively effect in slowing down Lopez. For the rest of the game, a mix of the veteran starting unit and the more energy-oriented bench stayed on the floor and was generally successful.

- Al Harrington probably could've driven to the basket more, but his offensive game was really a delight to watch. He had it going from everywhere, finishing 9-11 from the field and 3-4 from downtown for 23 efficient points. He also continued playing after a shot in the nuts so bad he could barely walk, so add a few points for bravery. Sun Yue found Harrington's pain to be hilarious, thus marking the only time I've ever seen the man even crack a smile. I'm not gonna jump to conclusions and accuse Sun of sadomasochism quite yet, but I've got my eye on him.

- I've been talking up Jared Jeffries' improvement throughout training camp, and I think y'all got to see what I was blabbering about. It started very badly, with his first three-point attempt striking what appeared to be the side of the backboard, though it may have actually hit somebody in the crowd, it was that far off. From that point forward, though, Jeffries made downtown magic like we've never seen from him before. He connected on three straight treys from what's become his favorite spot- the left corner. The bench went absolutely nuts, and in a post-game interview, Al Harrington actually attributed the team's energy to Jared's inspiring work from behind the arc. Jeffries also defended pretty well, registering a block and generally making his presence felt.

- Wilson Chandler shot well (3-6) from downtown, but did what he could to get closer to the rim. At times, this meant overdribbling a bit, but Wil finished with 21 points on 7-13 shooting, as well as a team-leading 7 free throw attempts. Chandler's capable of getting double-digit free throws a game, but tonight was a good start. He also absolutely wrist-raped a shot by Chris Douglas-Roberts in the first half and ripped down 7 rebounds, and I mean ripped.

- Darko bruised his knee mid-way through the game and had to leave (the word was that the staff was just playing it safe), but showed flashes in his 8 minutes of play. His jumper wasn't falling, but he blocked a shot, defended pretty well, and hit a nice lefty hook. My only major criticism is that he needs to keep his hands up on defense. His footwork isn't bad.

- Toney Douglas's shooting line doesn't look superb (2-9 for 8 points), but he added 3 assists, 5 rebounds, and a steal, and had himself a pretty solid game. Though he was only credited with the single steal, Toney was directly responsible for a handful of takeaways because he got over screens and deflected a lot of passes. He's also willing to hit the glass, which includes grabbing D-bounds to start the break, and following his own shot, which bought the Knicks an open three at one point. As far as the shooting goes, I think Toney's best bet is to stay inside the three-point line. He's got pretty good form on his jumper, but must not be used to NBA range. It's not unlike Nate Robinson's situation in his rookie year. To be fair, two of Toney's outside attempts were last-second heaves. Either way, Douglas is probably better off shooting twos for the time being.

- Jordan Hill was active, but looked pretty much as he did in summer league. His jumper just wouldn't fall, and he couldn't connect at the rim despite good positioning. He's good at drawing contact (3-4 from the line), but can never seem to finish at point blank range. I can't quite tell if it's his lack of strength or a low/early release point that gets him in trouble, but his close attempts are always swat fodder for one reason or another. On a separate note, there was one moment that went unnoticed by the announcers in which Hill lined up for a free throw at the college block and had to quickly step back to the wider key before the shot went up. Overall, Hill didn't look bad. He just looked like a rookie.

- Actually, while I'm on the subject, Hill's headband makes it so that one of his braids flips forward and hangs over his forehead. It kind of makes him look like an angler fish. 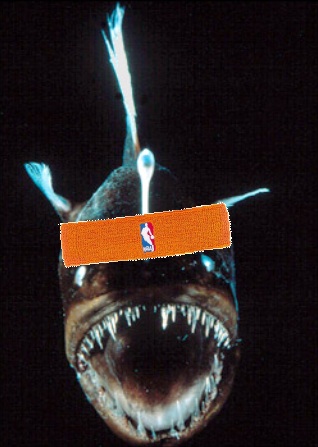 - I'd like to see Nate Robinson attack the basket more than he did, though he kept his turnovers number to one, dealt the ball well (5 assists), and brought mayhem to the backcourt defense with Toney.

- Danilo Gallinari shot fine from downtown (2-4), although I believe his misses were both airballs on semi-forced attempts. His passing, though, was the real show. Gallo finished with 4 assists, including two dazzling passes to David Lee off of drives, and one spinning dish to Al Harrington on the perimeter which looked out of control, but was on the money. It was a stunning talent of Gallo's that we'd never really seen before. As you'd expect, I damn near soiled myself after each of those passes.

Some other odds and ends:

- Joe Crawford, Warren Carter, and Marcus Landry got the garbage time minutes. Nobody did anything spectacular, though Crawford managed to lead the team in beard-growing in just 6 minutes of play. He grew 0.23 beards in those 6 minutes.

- It's weird to hear an announcer pronounce the "r" in "Chandler" after two years of "WIL-SON CHANNNN-DLAAAAAA" at the Garden.

- Apparently, the moment we've been waiting for has arrived: Keith Urban and Sugarland are playing together. Just passing along that information, since you've been waiting so long.

- Also, there is a concert that consists of an entire orchestra and choir singing songs from video games. It includes free giveaways and a costume contest. Anybody wanna go with me and dress as Banjo Kazooie?

- You know, I can appreciate a little geekiness,- I do write a blog, after all- but a video game concert sounds truly lame. I invite you to convince me otherwise.

- MSG is running a commercial now that features Danilo Gallinari burying those long jumpers in the closing minutes of that game against Orlando last year. It's well done, but they do know the Knicks lost that game, right? The fact that the marketing department is forced to spin commercials out of defeats probably says something about this team's recent history.

- Danilo Gallinari on his health: "I feel my body. I feel myself".

And that's all I got. I've got work to do this evening, but I swear I'll get to editing and posting my interview footage as soon as possible. I'll do what I can tonight and videos will go up throughout this week. Meanwhile, the Knicks' next preseason game is on Friday against the Celtics. If you plan on watching, I encourage you to join in the game thread. It's a ball when people show up.